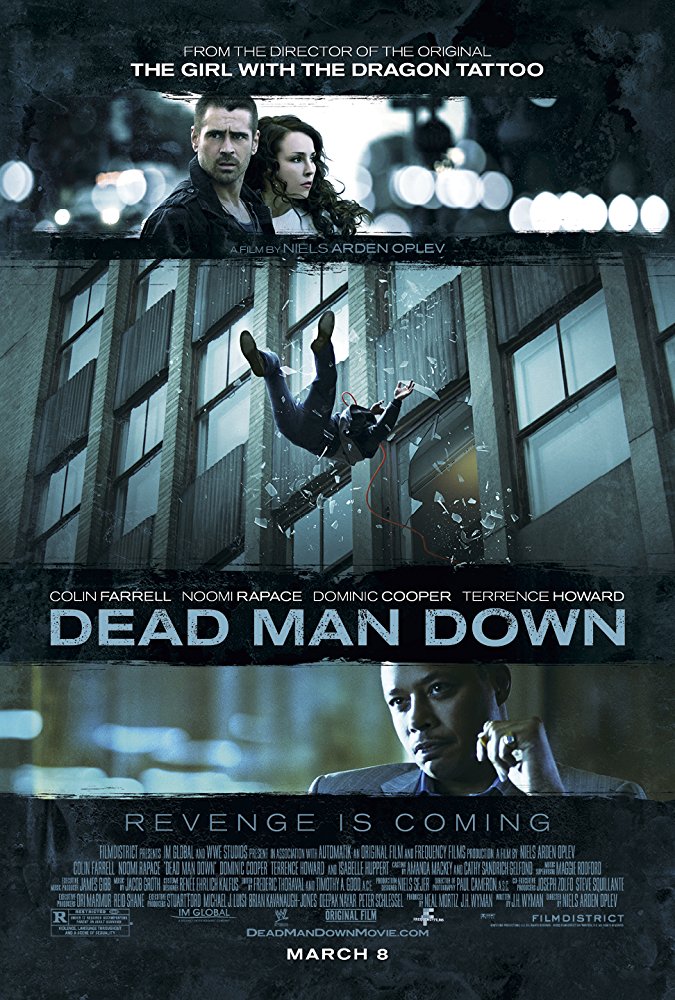 Plot: A woman who has been brutalized and maimed by a New York crime boss blackmails his right-hand enforcer into working for her - and taking out the man responsible for her situation. -- Chris Kavan

Ah, revenge - you'll can never go wrong with sweet, sweet revenge. Noomi Rapace gives the better performance, though Colin Farrell does admirably as well. A few twists here and there, but nothing Earth-shattering - but if you want a little revenge action - it should fill the void.

A crime flick with a couple of decent twists and un-conventional moments. The rest is mostly expected and routine genre pastiche. Surface value entertainment worth at least a rental.

What a terrific movie! Howard, Rapace, Ferrell, everyone did a great job! The plot was very engaging, and the characters were perfectly developed.

A movie soaked in a pool of melancholy

"I didn't kill you because they've got you."

A squared revenge. You could summarize this crime/drama like that. Victor (Colin Farrell) is a man who has already infiltrated some time in a corrupt gang, run by Alphonse (Terrence Howard), a not so kosher developer. They are responsible for the death of his daughter and asked an Albanian gang to scare them a bit, after the couple wanted to take legal actions. His wife is killed by the Albanians and they leave him for dead behind. The only goal in Victor's life is to make the gang , and mainly Alphonse,suffer with as much pain as possible, for the death of his family.However all his planning gets deranged by the hands of his opposite neighbor Beatrice (Noomi Rapace), who had a severe traffic accident in the past which was caused by a drunk …

A unique plot where characters are coincidentally intertwined. Victor (Colin Farrell), an Engineer, makes friends with Beatrice (Noomi Rapace). They meet up and she blackmails him after they meet at a restaurant. He reveals his real identity and the person responsible for killing his wife. Laszlo Kerick's identity has been exposed by Darcy. The film slows down when the conversations between Beatrice and her mother. Some weak points: pacing and plot could have been better. It was baffling how the discovery of Laszlo by looking below the refrigerator was so easy. Alphonse Hoyt (Terrence Howard) was not menacing enough while having some pretty lousy lines to boot. Colin Farrell just isn't that convincing for this critics opinion though this one comes close. The direction, …

Dead Man Down (2013) Victor (Colin Farrell) is the right-hand man to a New York City crime boss (Terrence Howard). Victor must find the killer who is threatening his boss. A woman named, Beatrice (Noomi Rapace), who seduces Victor and complicates things even more, may push him into a situation that he may never escape. This is one of those films that takes so many twists and turns that you fully don't understand what is happening until about three fourths of the way through the film. Noomi Rapace is wasted in the character of a damaged woman (literally, her face is severely cut up in a car accident) who meets Victor after a series of flirting glances. In a film where Farrell is playing a thug enforcer for a mob boss, there is very little action with only one really good action …

Its funny you say that. I thought it had the same feel as GWTD. Didn't know the same people were involved.

I saw the trailer before Django Unchained - I do like Noomi Rapace - and the fact it's teaming her back up with the director of The Girl with the Dragon Tattoo (the original version) - it looks like it should be good. I'm still on the fence whether I'll see it in theaters, but I'll definitely be watching it at some point.

This movie looks like it could be really good. I hope everybody involved steps up to the plate. This just might be one I go t the theaters for.