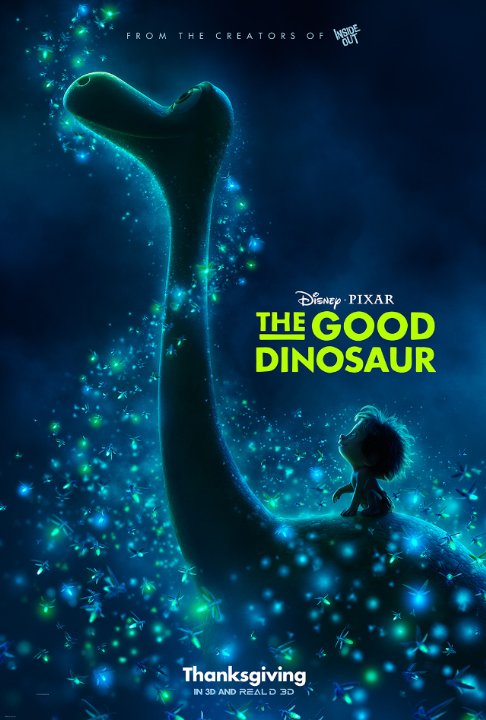 Plot: In this alternate history, the asteroid that wiped out the dinosaurs missed Earth. The great dinosaurs did not become extinct, and we follow a lively Apatosaurus, Arto, whose family becomes frightened by a traumatic event. The big-hearted Arlo sets out on an adventure and is joined by an unlikely companion - a human boy. -- Chris Kavan

"The Good Dinosaur" is a coming-of-age story of perseverance with the heart and maturity Pixar is famous for.

More Like âThe Mediocre Dinosaurâ Despite mindblowing animation and some fun moments, The Good Dinosaur disappoints with a pretty boring script, Forgettable characters, And a very by-the-numbers beat to it. Still, Iâll take this over Cars 2 ANY day. Rating: Rotten

The Good Dinosaur is one beautiful animated movie with many creativity elements in it, but the movie itself sadly doesn't hold up. The story isn't anything special, it's very predictable at times and overall it was really disappointing. It's not bad as some people say, but it's not great.

'The Good Dinosaur' is another slight disappointment from Pixar. I didn't enjoy this film near as much as I have with the majority of their other works. This isn't as dull and dumb as the 'Cars' series, nor is it similar to the disappointing bait-and-switch that was 'Brave'. It's more in line with the mediocrity that was 'Monster's University'. 'Good Dinosaur's story is entirely made up of done-to-death tropes I've seen in countless other Disney (and non-Disney) animated films. You have a meek child character who loses a parent(s) then goes on a journey to find their self worth. They meet odd characters along the way. Some interesting, and some annoying. The problem is that none of what I just stated is presented in a new light whatsoever. It's all so damn predictable to the …

wasnt sure about this one going iin to it yet it was a touching movie that really tugs at your heart like i expected anything diffrent from pixar'sorry pixar for the disbeleif' it was laugh out loud fdunny at some points others u are crying took my 12 year old sister she felt the same way i did that it was sweet and touching just parents PLEASE KEEP IN MIND ITS RATED PG FOR A REASOIN!! and u should be fine there are deaths and lots of danger some kids may not be able to handle it is also as i mentioned before very sad but yet i cant not recomend it its just a good idea to know your kids tolerance before the movie me and my sistrer 'dont really know who liked it more lol' other than those wise words of advice to parents i recomend it to parents and kids alike

No posts have been made on this movie yet. Be the first to start talking about The Good Dinosaur!