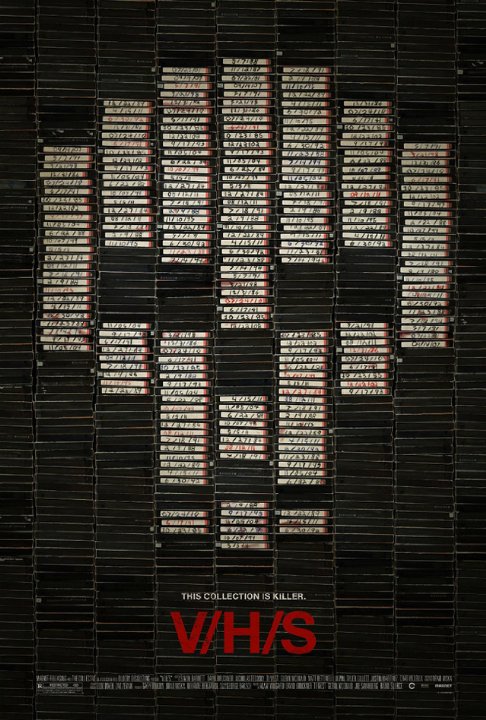 Plot: An anthology of found-footage horror films: a group of lowlifes and misfits are contacted by shadowy third party to burglarize a desolate countryside house and acquire a rare videotape. Once there, however, the group are confronted by series of televisions and each video they see gets stranger and stranger... -- Chris Kavan

This movie is a breath of fresh of air. Horror movies have seemed to be lacking for a long time but V/H/S raises the bar. It combines found-footage style with anthology horror - the latter being one of my favorites. The stories took my wife and I out of our comfort zones, which is the first step to a good horror story, then shocked us with suspense and the right amount of gory. I never felt like the scares were cheap jump scares. Some of the sequences even felt like snuff films. My wife refuses to re-watch this or even give the sequels a chance. For me, however, this is one of my new favorite horror films.

This movie has a lot of blood and I mean a lot. An anthology of found-footage horror films: a group of lowlifes and misfits are contacted by shadowy third party to burglarize a desolate countryside house and acquire a rare videotape. Once there, however, the group are confronted by series of televisions and each video they see gets stranger and stranger. This movie scared the living day lights out of me when I first watched it and the movie is not as bad as roger Ebert said but that's his opinion.

The found footage thing has been played out, but cutting things down into shorter chunks somehow makes things fun again. The segments weren't exactly horrifying, but each had its moments and overall I liked the effort - even from Ti West. Don't try to analyze this too much - it's supposed to be supernatural, not technically accurate. Have fun!

"It's terrifying," they said. "It's the scariest movie of the year," they said. Okay, let's just cut to the chase: V/H/S sucked. It didn't only suck as a movie, but it totally sucked two beautiful hours out of my life that I will never get back. When I watch a horror movie, I at least want one thing and one thing only - to get scared. V/H/S didn't scare, startle, or frighten me, and it's even more pathetic when SIX guys were put behind the camera to direct different segments of the film. And believe it or not, one of these guys is Ti West, the talented director who made this year's The Innkeepers. Halfway through the movie, I was at least hoping it would take A LITTLE bit of the Devil Inside taste out of my mouth. Unfortunately, I might have liked The Devil Inside more, and that was a …

V/H/S sometimes great, other times not so much.

The found footage sub-genre of horrror, though one of my favorites, has certainly run it's course by now. What more can you do with the concept that audiences haven't seen anymore? But V/H/S proves that there is still some originality to the style. Like all anthology films this one is uneven, with each short piece of horror varying in quality. When it works, it does the job spectacularly (especially the first and last segment.) There is also one segment done entirely through Skype calls that is surprisingly effective and quite disturbing and creepy. However there are also a couple that just don't cut it, and are neither scary or just dull. However, V/H/S has a lot of potential for future installments, where more horror directors can make their own little shorts. Definitely worth a …

Worst 8 of 2012 by Stoney McStonerson

No posts have been made on this movie yet. Be the first to start talking about V/H/S!