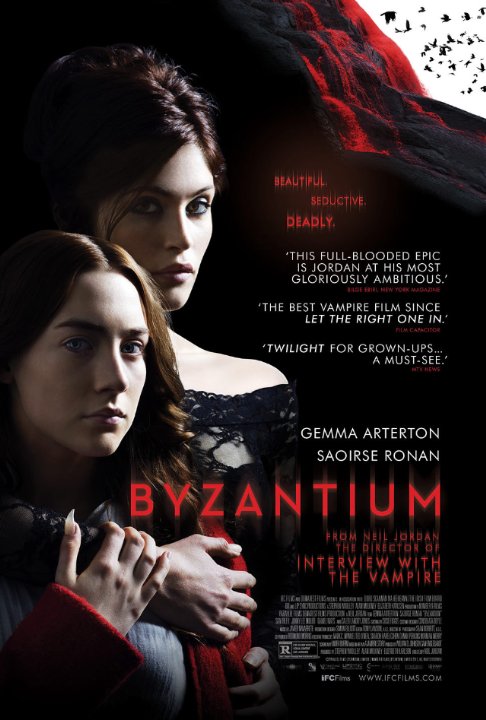 Plot: Two mysterious women arrive in a run-down coastal resort, seeking refuge. One befriends a local, Noel, who offers them shelter in his guesthouse, Byzantium. The other comes across Frank and lets sleep their lethal secret: both are 200-year-old vampires, and they need fresh blood. The secret gets out and soon the two must deal with the deadly consequences. -- Chris Kavan

excellent movie with a vampire theme ( see plot outline) like interview with a vampire is more about being immortal and the price paid for that. and the history lies love and hate and secrets the mother daughter vamipire carry with them and deal with as they try to stay alive and live. there's good dialogue to throughout the film. its a very good story and not a silly film. like most vampire movies there's a lot to it. i liked the ending too. if you prefer your vampires real then this is the movie for you. while its not great i would class it as very good. a film you can get into it. rather than be bowled over by effects and sillyness. This is all about the story

After having watched Antiviral and being charmed by Caleb Landry Jones I added this film to my "must watch" list. Finally, I've watched it and I must say it did not disappoint! I thoroughly enjoyed the storyline and the characters. These vampires are not your average sparkly Twilight kind.

A mother and daughter living as vampires move to a small seaside town, where the revelation as to their nature leads to a confrontation with the secret society who banished them 200 years earlier. Neil Jordan returns to the vampire genre in this low budget story that concentrates more on characterisation than action and gore. The premise is that of how the past shapes our future and even for an immortal, it is something that you can never escape. Saoirse Ronan puts in a typically fine performance as the haunted girl trapped forever in the body of a 16 year old and the period scenes set in their past are nicely done, echoing very much the format of Interview With The Vampire. Lacking its big names and big budget and any real surprises, Byzantium cannot match Jordan's previous foray into …

A non-traditional approach to the vampire genre

"I write of what I cannot speak, the truth. I write all I know of it, then I throw that pages to the wind, maybe the birds can read it."

A non-traditional approach to the vampire genre. A new refreshing look from a different angle. Not the stereotypical image of pale creatures of the night provided with bloodshot eyes and sharp fangs hiding in dusty basements in a coffin. No melting, burning or imploding is involved when they are exposed to sunlight. No here we have persons who are part of an alliance and inherited a centuries-old tradition.
It's the story of a mother (Gemma Arterton) and her daughter Eleanor (Ronan) who have been hiding for years because women actually aren't allowed in the alliance. And let me tell you, I'll gladly surrender myself to Gemma the female vampire so …

To be continued by Elizabeth

No posts have been made on this movie yet. Be the first to start talking about Byzantium!