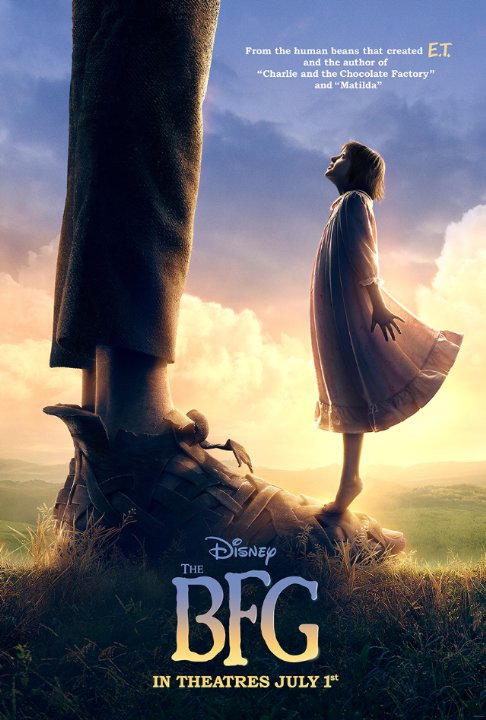 Plot: A young girl, Sophie, encounters a BFG (Big Friendly Giant) who, despite his appearance, is a gentle, kind soul. She finds out he has been outcast because, unlike his peers, won't eat little boys and girls. The two set out on an adventure to make sure the aggressive giants leave the human world alone. -- Chris Kavan

Steven Spielberg's first live-action family feature since "E.T." (with the exception of "Hook"), "The BFG" is an epic fantasy adventure fit for all ages.

Steven Spielberg's first collaboration with Disney is a heartwarming adaptation of Roald Dah's children's classic The BFG. Mark Rylance plays the gentle giant and newcomer Ruby Barnhill is his feisty young companion. The CGI effects are cartoon-like yet the detail and interaction with the human characters is surprisingly effective. It's perfectly suitable for families that want something more relaxed than manic. The mood is classic Spielberg mystery and fantasy melded together with the right touch of whimsical charm.

"The BFG" is decent at best. Which is a real shame, because it's directed by the greatest and the most iconic film makers of all time. You'd expect more from Spielberg after last year "Bridge of Spies". Coming to think of it, I can't believe Spielberg directed this. Even with all the bright colors and the bizarre adventures, I still felt I was missing something.

But I don't hate the movie. It dose have it's magical and sweet moments that separates it from being a miss fire. Ruby Barnhill as Sophie was pretty good and it proves that there are good kids actors out there. But the saving grace of the movie is Mark Rylance (as the BFG) who really made this movie watchable. Rylance captures the lovable, fun, and joyful giant from Roald Dahl's book. The film itself is technically well done …

"Where am I? Giant country!"

Steven Spielberg knows how to bring the magical world of Roald Dahl to life on a screen in a masterly way. Occasionally I need to watch a not too complicated or weighty film. Such a film that takes you to an enchanting, carefree world and to forget about everyday worries for a while. This time it's a lovable little girl, Sophie (Ruby Barnhill), who after seeing the big friendly giant wandering through the dark streets of London is kidnapped by him and taken to Giant Country. Just like Mowgli in "The Jungle Book", Sophie is surrounded by computer-generated animations. But not completely. The face of the BFG looked quite familiar. Afterwards I discovered that Mark Rylance, who recently starred as Rudolf Abel in "Bridge of Spies" (also directed by Spielberg …

'The BFG' Has a BIG Heart

'The BFG' is the kind of family fantasy we need nowadays. It's brimming with wit, charm, gleeful humor, emotional depth, and great characters. Spielberg has found his signature "magic" again; that indescribable marriage of emotion to visuals one can only ascribe to his previous works. His style feels genuine again. I was brought back to a childlike state while watching this magnificent fairy tale. Spielberg manages to maintain a constant state of pure wonderment throughout. I was sucked into this world right from the opening scene and I never left - thanks to the two main characters played excellently by Rylance and Hall. The bulk of the story mainly focuses on the growing friendship between the pair. Rylance is incredibly endearing as the 'BFG'. Everything from his appearance, …

A realistic robot uprising? It sounds like an evil version of A.I. where Gigalo Joe is trying to kill us. If this is going to work, Spielberg better ditch his sentimental style - if robots are going to take us down, I want it to be visceral. It's a bit too early to tell what direction this is going to take, but I hope for the best.

This Steven Spielberg vehicle was adapted by Cloverfield writer, Drew Goddard. The author (not Drew) has a Ph.D. in robotics basing much of the book on existing experimental technology. It tentatively comes out on July 3, 2013.