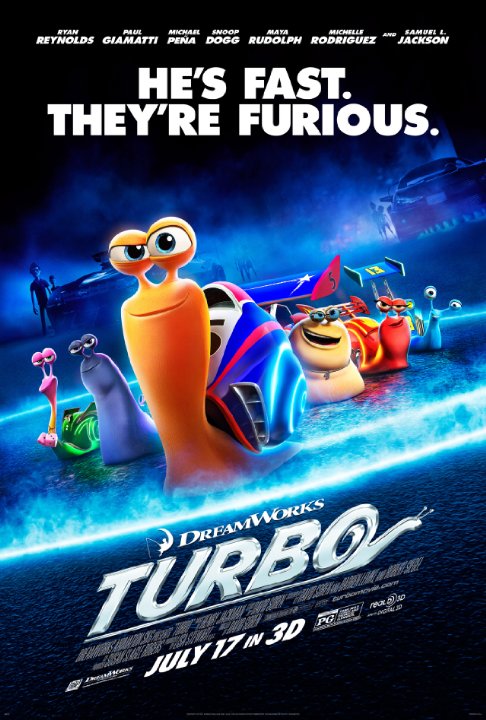 Plot: A snail tired of living a snail-paced life dreams of speed, just like his hero five-time Indy 500 champion Guy Gagne - much to the horror of the snail community, especially his cautious older brother Chet. A freak accident suddenly gives him the chance to live his dream and starts him on an extraordinary journey that proves nothing is impossible. -- Chris Kavan

This movie is like ratatouille with snail's. I feel really sorry for Ryan Reynolds because he got a lot of hate from people a bout his movies but this movie was a lot of fun.

Turbo has bright colors, good music, and lots of laughs. The problem with this animated film about a snail wanting to race in the Indianapolis 500 is that it is not a film to be enjoyed by both the parents and the adults. At least, that was the case in our family. A lot of animated films of late have enough of a storyline to appeal to the adults, but while my six year old son loved this movie, I fell asleep the last 20 minutes of the film. I hardly ever fall asleep in a movie theater. If I don't like the film, I simply walk out. But, as stated, my son loved Turbo. He walked out of the theater talking about his favorite parts of the movie. This boy of mine is not a movie lover, but he fell in love with the trailer and was eager to go see Turbo in the theater. Now, he is talking excitedly …

No posts have been made on this movie yet. Be the first to start talking about Turbo!