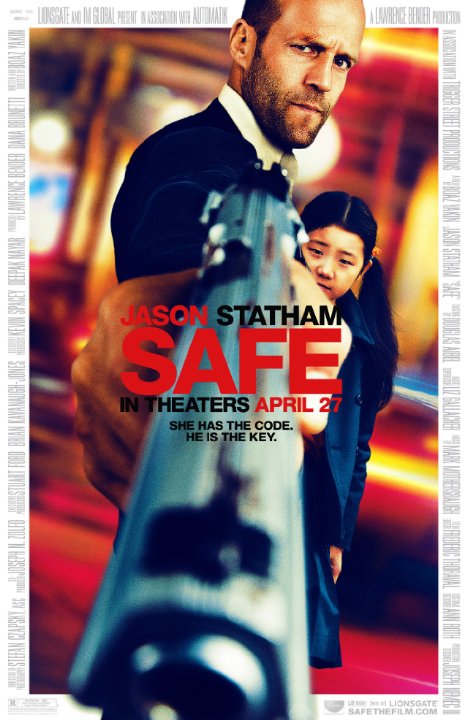 Plot: A former elite agent must take on two tough assignments: rescue a girl from the dangerous Triads while using a coveted safe combination to outwit the Russian Mafia, corrupt cops and the Triads themselves. -- Chris Kavan

Jason Statham safe's the best to last. Jason Statham safe. the story is about A former elite agent must take on two tough assignments: rescue a girl from the dangerous Triads while using a coveted safe combination to outwit the Russian Mafia, corrupt cops and the Triads themselves. this movie was like taken but with Jason Statham kicking ass.the camera is very shaker in some place and I can't tell what is going on.

If you've seen one Jason Statham film, you've seen them all - the man does one thing but he does it well: kick all kinds of ass. But unlike Crank or The Transporter - he's protecting an young girl (as opposed to a woman closer to his own age - so you get loads of violence but none of the sexual overtones). It's a slight change of pace, but let's face it - it's guns, punching, kicking, car chases - mindless entertainment. Once again he plays it safe - and if that's what you want, that's what you'll get.

Luke Wright (Jason Statham) is an MMA fighter who refused to blow a fight and encounters Mei (Catherine Chan), a Chinese girl who knows a long number vital for business. It's screenplay, lackluster acting and lack of better development for the antagonists were its flaws. The action so authentic, fast and hard hitting. Car chases, loaded guns and hand to hand fights were well choreographed. Safe's direction and entertainment value was good coupled with themes of friendship, police corruption, business and trust. Statham seems to be picking his roles better.

A young Chinese girl who can memorize series of numbers becomes a vital piece between conflicting groups trying to outwit each other just to get a big cash in a safe which combination stocks in her mind.

***
First few minutes of the film and I already appreciate the good visual and audio transitions from scene to scene. I also like the parallelism shown on the first half. The cinematography is great, the use of mirror and reflections.
Never mind the predictable story, it was a good and nice action to watch! Satisfying performances by Statham and Reggie Lee. For the first time, I recognized Lee's acting in a film, before I only have fun watching him on Grimm (TV series) as a supporting cast playing as a cop handling evidence, handing it over to the lead detectives. Good to see him …

No posts have been made on this movie yet. Be the first to start talking about Safe!