How to Train Your Dragon 2 Movie Information 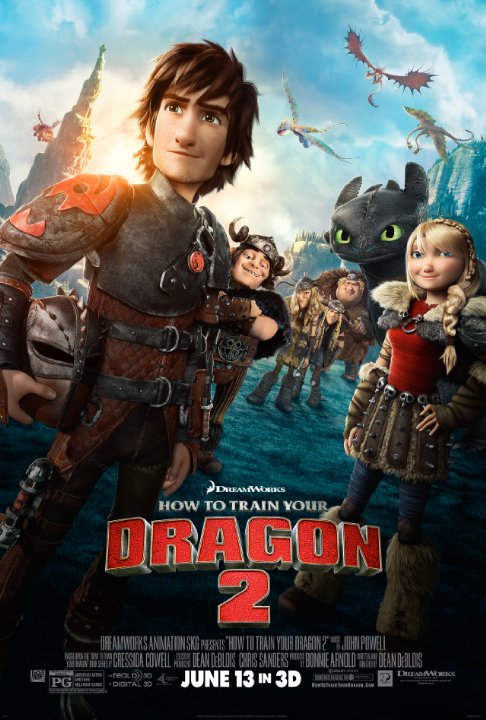 Plot: Set five years after the original film: Now that humans and dragons coexist, Astrid and her gang participate in the latest sport, Dragon Racing. Meanwhile, Hiccup and Toothless explore the surrounding uncharted territories. During one such trip, the duo stumble upon a previously unknown ice caves - home to hundreds of wild dragons, a mysterious rider and a new battle that threatens the peace they have established. -- Chris Kavan

Rather than rehashing the original, "How To Train Your Dragon 2" further expands the world established in the first film and introduces us to some great new characters at the same time.

Toothless is so freaking cute and awesome. This movie has one of the best animation that I have seen in a while, The villain in this movie is such a dick and the Dragons are so colorful and cool.

A Little Less Bite Than The First

How to Trail Your Dragon 2 is cute but not as good as the original. As with the first one the movie is beautiful and the dragons are fun, exciting and cute. The story lacks a little from the first one though. It is pretty slow going at the beginning and takes a little while to get going. It finally picks up at the end with some big fun battles but really gets slow in the middle. The returning characters are all great and as I remembered them, fun and bubbly. The new characters that are introduced fell a little flat for me though. They felt a little lifeless and empty compared to fun characters from the first one. It just felt like How to Train Your Dragon 2 had a little less heart than the original. Rarely are sequels better then the original, especially with children's movies. …

This is Dreamworks' best animated film to date. It's even better than Shrek, Shrek 2, and the Kung Fu Panda movies. It's vastly superior to the original movie as well and that was already potential classic material for future generations. The story, the animation, the character development, and the size of everything that happens onscreen is unlike anything that Dreamworks Animations has done before.
We see the end result of Hiccup (Jay Baruchel) mending the rift between humans and dragons five years later with a society where both species coexist side-by-side, protecting each other and having fun at the same time. It's a peaceful existence until the arrival of a would-be dictator named Drago Bludvist (a menacingDjimon Hounsou) and his mind-controlled dragon army. Hiccup, his …

'How to Train Your Dragon 2' is a solid sequel. It has a mostly good story, amazing animation, and a rather sweeping large scale. However, this time around I was not as invested. I never grew attached to the characters the first time around, so when the dramatic moments reach higher ambition I was not as enthralled. A couple of those moments were predictable. Also, the human villain lacked any personality and served minor purpose. The supporting characters were only window dressing this time. The dragons are marvelous. Each one is detailed, distinct, and visually memorable. None look or act similar. The flying/action scenes continue to impress. And Hiccup rises to the heroic pedestal even more so. A worthy sequel, with minor problems holding it back from being as great as the …

I just got back from seeing How to Train Your Dragon 2, and I am struck by not only how good it is, but by how good this whole summer has been.Edge of Tomorrow, Neighbors, 22 Jump Street;&amp;nbsp; These are all really good, expectation shattering movies that are more then worth the price of admission to see on the big screen.&amp;nbsp; HTTYD2 is another fantastic movie in a summer were there are more awesome movies then lame ones.&amp;nbsp; I pity anyone who hasn't been going to the local cinema at least &hellip;