Rise of the Guardians Movie Information 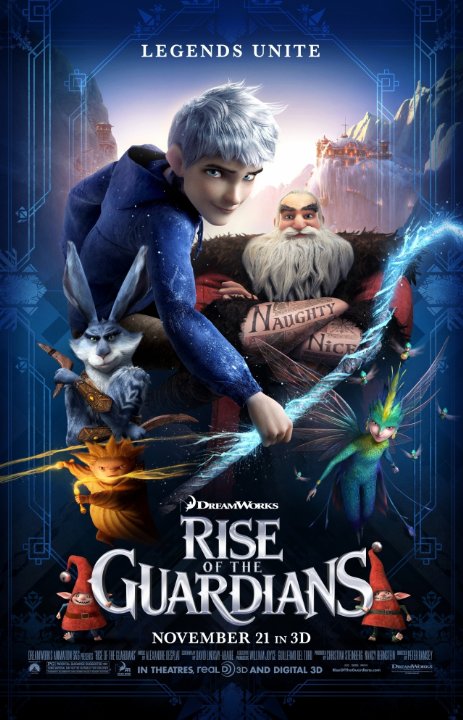 Plot: Even childhood icons have to deal with issues. When Santa Claus, the Easter Bunny, the Tooth Fairy and Jack Frost unite to deal with a bully, the legends become heroes.

It's better than some Dreamworks animated films, but it still isn't very overwhelming.

I loved it! I wish I can be a kid again and wonder if these guardians are real or not.

The best animation that Dreamworks has ever done and it's associated with this well-meaning but ultimately silly kid's stuff.

I guess I should make it understood before I start this review that I am not a fan of Dreamworks Animation. Most of their films just seem like products to me, and there seems to be little creativity going into them. With that being said, it delights me to say that Rise of the Guardians is an excellent film that far surpassed my low expectations.

The plot, for the most part, is relatively simple. Jack Frost is tired of not being believed in, but gets his chance to be seen and adored when Santa Claus, the Tooth Fairy, the Easter Bunny, and the Sandman call upon Frost to help overcome the dastardly Pitch.

I wanted to dislike this film. The trailers and commercials made this film look exactly the same as everything else Dreamworks has done. And yet, as I continued to watch, I found …

Rise of the Guardians review

"This wonder is what I put in to the world! And what I protect in children. It is what makes me a Guardian. It is my center. What is yours?" Jack Frost (Chris Pine) rises from the cold water because of "Father Moon." Nicholas St. North (Alec Baldwin) summons Tooth Fairy/Tooth (Isla Fisher), the Easter Bunny/E. Aster Bunnymund (Hugh Jackman) and the Sandman/Sandy since Pitch the Bogeyman (Jude Law) is threatening children with his powers. An innovative concept coupled with sufficient action and drama that both kids and adults can enjoy. Brilliantly scored and animation was believable. Artists for the voices were evenly matched though the picture could have added more humor and was shortened since some scenes were unnecessary. Rise of the Guardians is about believing, friendship, and …

Rise of the Guardians (2012) When the evil spirit, Pitch (voiced by Jude Law), attacks Earth, the Immortal Guardians fight to protect the children. In this wonderfully animated film, the Guardians are made up of Santa Claus (voiced by Alec Baldwin), the Tooth Fairy (Isla Fisher), Sandman (who doesn't talk), and The Easter Bunny (Hugh Jackman). Jack Frost (Chris Pine) has been asked to join the group, and he may be key to defeating Pitch and his plan to conquer the world. I really liked this film with its animation and use of 3-D to great effect. It's a funny, fun film to watch with a new take on all of our childhood heroes. I especially enjoyed Alec Baldwin as a tattooed, sword wielding Santa Claus and Jude Law as the delightfully evil Pitch. My Rating: Full Price

No posts have been made on this movie yet. Be the first to start talking about Rise of the Guardians!