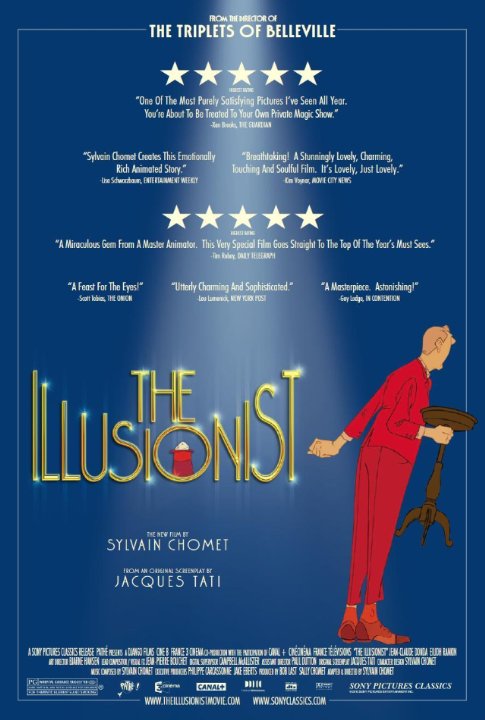 Plot: A French illusionist realizes he is part of a dying art as his travels lead to more and more obscure and fringe performances. Finding himself in Scotland, he meets a young woman, and fan, who will change life. -- Chris Kavan

While I don't believe I enjoyed it as much as "The Triplets of Belleville," "The Illusionist" is just as stylishly animated and emotionally moving.

A beautifully-drawn and marvelously-under-stated work of art, "L'illusionniste" is a stirring tapestry of the era of entertainment told from a magician who is attempting with all his might to prove to himself that magic still exists. A young girl who follows him from a stage show changes his life forever when he understands that magic exists in children and grows old and decays with adulthood. A moving and lovely piece, this film is one that will live through the ages.

I wasn't a big fan of Sylvian Chomet's last film, The Triplets of Belleville. I thought it was okay but I had way too many problems with it. In his second major directorial effort, he seems to have fixed a lot of the problems in Triplets, only he has created a few new ones in the process.

The Illusionist is about a magician who is coming to terms with the fact that his is a dying trade. Despite his agents' efforts, his gigs are constantly less glamorous, leading him from performing on stage in front of a few loyal fans to performing in bars for the uninterested. Along his sorrowful journey he encounters a young girl who becomes infatuated with his talent. The two continue on the road to nowhere as the illusionist's dwindling career becomes nothing more than a hobby, if even …

No posts have been made on this movie yet. Be the first to start talking about Illusionist, The ( illusionniste, L' )!