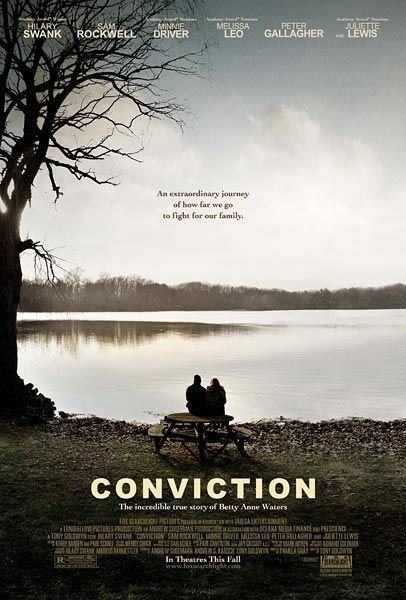 Plot: When her brother exhausts all sources to overturn his robbery and murder charge, single mother Betty Anne Waters puts herself through law school in order to fight his conviction. -- Chris Kavan

"Conviction" is an incredible true story about Betty Anne Waters who does everything for her brother, believing he was wrongly found guilty on a murder case. VERY GOOD and INCREDIBLE! No doubt, the story is very inspiring, one of the greatest, and a must-watch film. The acting was very fine, moving and outstanding. This movie is a winner, also the actors. The only negative note I can give is that the timeline (how it was presented) was a bit confusing. DON'T DARE TELL ME IT ISN'T A GOOD MOVIE.

Great movie that's based on a true story. It's one of the movies that brings attention to wrongful convictions. Interesting to see some of the obstacles that were in there way and how everybody was trying to get her to give up on freeing her brother. The movie is sad, humbling, and uplifting.

Kenny Waters (Sam Rockwell) was convicted of murder (killing Katharina Brow) in 1983. Betty Anne Waters (Hilary Swank) is determined to set her brother free by taking-up law, passing the bar and representing Kenny. There were 3 witnesses during the case: Sergeant Nancy Taylor (Melissa Leo) from the local police department, his ex-wife, Brenda (Clea DuVall), and his ex-girlfriend, Roseanna (Juliette Lewis). A touching true to life film about persistence, police corruption, lies, friendship, sacrifice and a tight sibling relationship. Screenplay was good with lines like: I hate the legal system, it's so inconvenient." and "You can't give-up." Rockwell and Swank drive the film, both equally impressive. The supporting cast was solid especially Driver and Lewis. Movie was interesting …

Conviction struggles with telling two stories - one of a strong bond between a brother and sister, and the other being the 20 year struggle of said sister trying to overturn said brother's murder conviction. Given all the time that has to be covered, both stories suffer somewhat, though Swank and Rockwell put in good performances as the Waters siblings. It's a little hard to buy the timeline, however, as Swank's character goes through 20 years without aging.

SPOILER! The biggest factor keeping it from getting to 3 stars, however, is the fact that this "true" story has major embellishments toward the end. The film makes a villain out of real-life Massachusetts Attorney General Martha Coakley. The film would have you believe that despite DNA evidence, Coakley refused to release Waters …

biography to watch by Sam

No posts have been made on this movie yet. Be the first to start talking about Conviction!