It's Kind of a Funny Story Movie Information 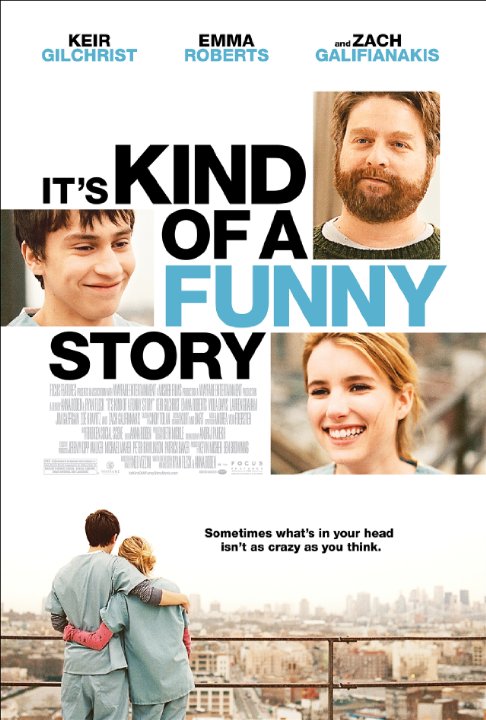 Plot: A clinically-depressed teen finds a new outlook on life after checking himself in to an adult psychiatric facility. -- Chris Kavan

A more modern and indie "One Who Flew Over the CooCoos Nest". It is heartfelt and has great characters that assist each other in emotional and psychological growth. A fun movie where Galifianakis shows he can play different characters than his standard get-up.

When It's Kind Of A Funny Story was in theaters & they were showing trailers for it on TV , I thought it was going to be just another comedy but it was something more then that.It's a comedy with heart & I liked it WAY more then I ever thought I was

It's Kind of a Funny Story review

Craig Gilner (Keir Gilchrist) admits himself to a hospital. He meets Bobby (Zach Galifianakis) and adores a girl named Noelle (Emma Roberts). Premise reminded me of Girl Interrupted and One Few Over the Cuckooâs Nest. Screenplay was extraordinary with lines from Dr. Eden Minerva â âLord, grant me the strength to accept the things I cannot change; Courage to change the things I can; and wisdom to know the difference.â Craig â âIâll take my chances.â âBreathâ¦live.â Soundtrack upbeat, direction was fantastic (shades of Wes Anderson) and acting sincere in which the cast shows potential. Itâs Kind of a Funny Story has all the elements growing-up, guidance, and basically enjoying life. This reviewer was surprised how good this was despite its idea being emulated …

No posts have been made on this movie yet. Be the first to start talking about It's Kind of a Funny Story!