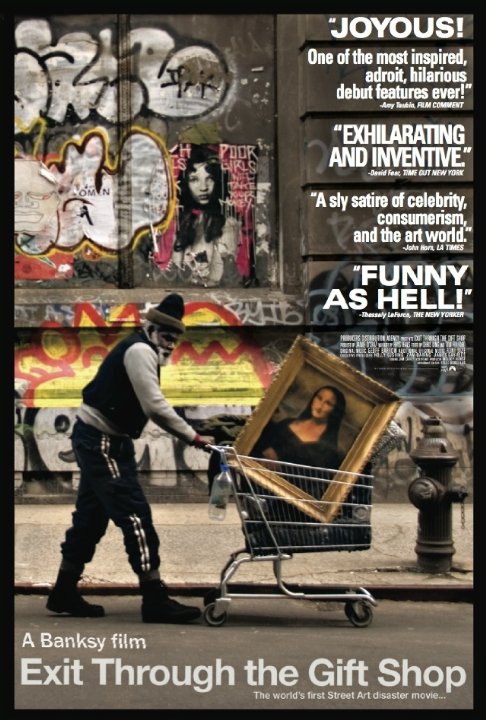 Plot: The story of how an eccentric French shop keeper and amateur film maker attempted to locate and befriend Banksy, only to have the artist turn the camera back on its owner. The film contains footage of Banksy, Shephard Fairey, Invader and many of the world's most infamous graffiti artists at work.

Much has been made of this film's authenticity but this story is too good and silly and entertaining to not watch. This film will take you places you may not have expected but I think you'll enjoy the ride

What is art and who is Banksy? What starts off as a documentary on street art - featuring the likes of Shephard Fairey, Space Invader and Banksy himself? - all filmed by a man who never puts down his camera, Thierry Guett - morphs into the same man deciding to become a street artist himself (Mr. Brainwash) and turning it into a lucrative commercial venture. But how much of this is real and how much of this "prankumentary" is farce and who is the joke on? I guarantee you one thing - you won't find another documentary out there quite like this one.

Filled me with disbelief and skepticism. This movie keeps twisting down different alleys, from a fascinating look at the rise of street art, the acceptance and conflict that brings about, to the unbelievable finale art show. So what exactly IS art? Is Mister Brainwash actually Banksy?

I wouldn't say that I am exactly "in the know" of the art world. I fully admit I pay more attention to mainstream films, so when I hear about very obscure artists I just don't know what people are talking about. Even when it comes to film, I don't really care about documentaries all that much. I also don't pay attention to still exhibitionist art whatsoever, so when I heard people praising a documentary made by a guy named Banksy, I was really lost. I have to admit though, after now having seen Exit Through the Gift Shop, I understand why this is such a highly regarded documentary.

The film centers on Thierry Guetta, a guy who ended up with a camera and never put it down. Through his documented wanderings, he came across the vast "underground" world of street art. Regardless of where …

No posts have been made on this movie yet. Be the first to start talking about Exit Through the Gift Shop!