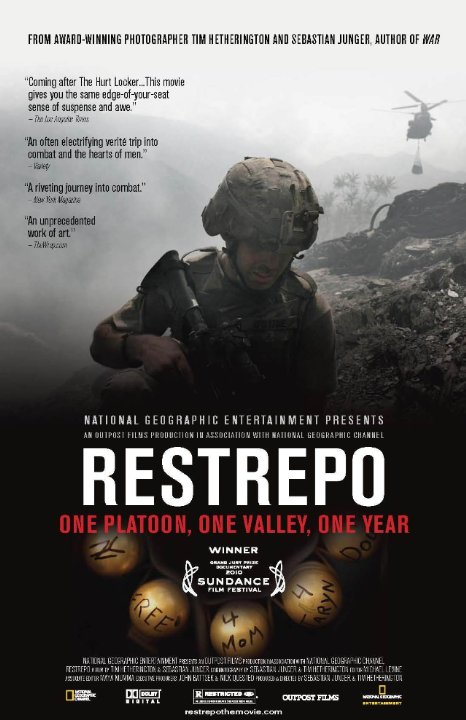 Plot: A pair of documentary filmmakers spent one year with the Second Platoon - a group stationed in one of the most strategically important and deadly valleys in Afghanistan. -- Chris Kavan

Great look into the realities of war - from the dealing with the locals to firefights that result in very real, very personal deaths. You won't find a much better depiction of what it means to be on the front lines in Afghanistan. It's powerful and moving.

A very gritty portrayal of the harangues of war in Afghanistan, "Restrepo" shows the humanity in soldiers as individuals, being afraid of what's out there, and being lost in an alien world where no one understands your words or your motives. Filmmakers Sebastian Junger and tim Hetherington did not need to showcase the violence, but had a rather Hitchcockian style to deal with the frights and fears of America's War on Terror, letting the sounds shake us and move us, and letting us see the soldiers before and after. A very well-made documentary, though one that has little news and less keenness.

Not earth-shattering, but it is a realistic and intriguing look at war and soldiers without an agenda. I wish the stories gelled better to provide a fulfilling narrative, but it did flow okay. Watch this if you're thinking of joining the army or want to learn about what our troops face daily in Afghanistan. God bless our brave soldiers everywhere!

No posts have been made on this movie yet. Be the first to start talking about Restrepo!