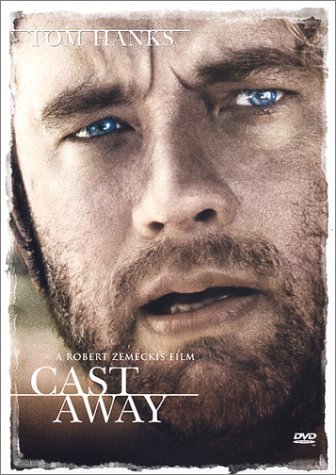 Plot: A man who is flying over an ocean has plane troubles as he crash lands on a deserted island. He struggles to survive.

The story is about a man who is flying over an ocean has plane troubles as he crash lands on a deserted island. He struggles to survive. I don't know why but I like it when a character is all alone and trying to survive on his owe, it feels more relaxing and this movie nails it.

One of Tom Hank's best performances of his career. The story is simple and could be dragged down by a poor actor. I mean there are not many actors who can make the only character for the bulk of the movie interesting. He allows the viewer to capture the emotions and thoughts he is feeling without having any dialogue between two people (except Wilson). This movie does a great job of portraying someone stuck on an island alone.

The beginning and the ending are interesting - the first for the intense tragedy it portrays and the latter for the openended question it presents. The middle, however, is uneven - sometimes captivating, and sometimes lagging. Tom Hanks, alone, on an island, can only sustain a film for so long and Castaway tries its length too much.

Tom Hanks is one of the most respected and gifted actors. Helen Hunt is another talent worth being skilled in her craft. This may have one of the best character build-up, but drags because of the films simple premise. Hunts abilities were not even stretched with such little screen time. Cinematography looked great since the setting was an island. It was like watching a feature film for "Survivor." Hanks does a terrific job of keeping sane and "surviving" with the aid of a single volleyball and various objects available. It was saddening to see Wilson gone. The abrupt ending was unsuitable based on the hardships endured. They should have also emphasized his personality after back to civilization. You would have mixed feelings after viewing the lengthy picture. Overall, you will …

Sappy ending keeps this movie out of top 25.

Cast Away is one of the most thought-provoking films I've ever seen. It follows the events before, during, and after Fed-Ex employee Chuck Noland (Tom Hanks, in an outstanding performance) becomes stranded on a deserted island. Things are pretty dull until his plane inevitably crashes, when things become truly compelling. Hanks portrayal of Noland on the island is brilliant, capturing the terror and hopelessness that must be going through Noland's mind.

The moments on the island are truly great for several reasons. Most of our emotion comes from what we see rather than what we hear; Zemerickis wisely halts the score and lets us feel like we are helplessly deserted on a quiet island, completely isolated from the sounds of every day life, such as people talking, car doors slamming, …

No posts have been made on this movie yet. Be the first to start talking about Cast Away!