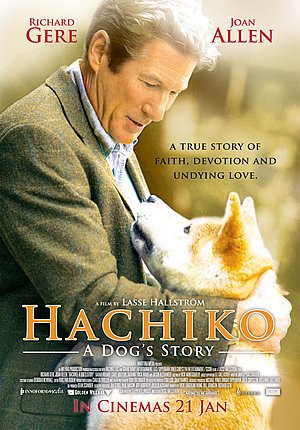 Plot: A man finds a puppy at the train station. They get very attached to each other and the dog follows his owner everyday to the train station and waits for him when he gets back from work. Even after the owners death he meets up everyday for years.This is the real story of the most loyal and loving companion to ever exist. -- Marielle

One of the hidden treasures that I discovered thru a friend. If you love drama and a dog lover, this is for you. Rarely do I get teary eyed in films (admittedly, almost with Toy Story III and Cars), but this gem really got me. Richard Gere is Professor Parker Wilson who adopts Hachi. His reluctant wife is Cate played by the talented Joan Allen. Jason Alexander is the friend of Prof. Wilson. You never though an Akita can act so splendidly. One of the best dramatic films I have luckily witnessed. If you haven't seen a film about loyalty, then this is highly recommended. Based on real events in Japan.

Based on the true story of a Japanese Akita who loved his master so much, he waited for him every day at the Shibuya train station in Tokyo until his dying day some nine years later.
Plot: Hachi, a Japanese Akita is befriended by a college professor (Richard Gere) when left abandoned at a train station. The stationmaster (Jason Alexander) encourages the professor to take the dog home, much to the surprised annoyance of the professor's wife (Joan Allen). But who can deny a homeless dog especially one that looks as cute as a button?

The professor and Hachi soon form a strong bond with Hachi refusing to sit at home while his master is at work so he waits for him at the train station, even in freezing weather as Gere commutes to the city for work every day. One day the professor …

Movies about Animals by PsychoFaerie

Movies about Dogs by PsychoFaerie

No posts have been made on this movie yet. Be the first to start talking about Hachi: A Dog's Tale ( Hachiko: A Dog's Story )!