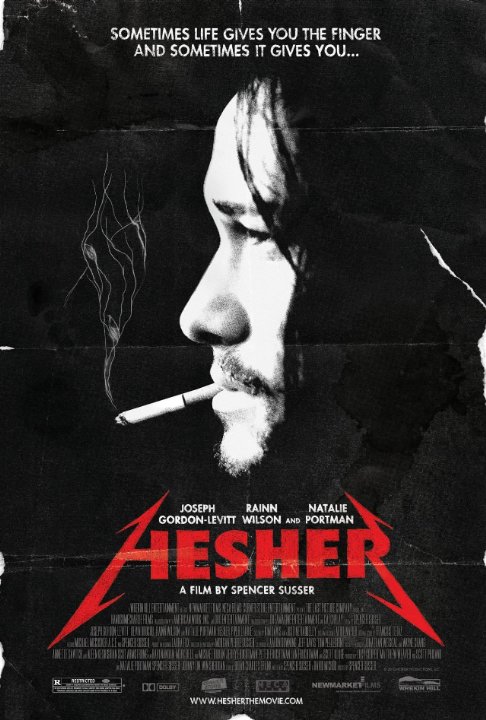 Plot: After losing his mother, a troubled young boy moves in with his grandmother. A man with a troubled past himself, Hesher, becomes a surrogate father, and tormentor, of the young boy while an attractive grocery clerk becomes a protector and object of desire. -- Chris Kavan

Packing profound humor and heart with sucker punch delivery, "Hesher" succeeds at the impossible; it makes Joseph Gordon-Levitt unlikable, but that's not necessarily a bad thing.

I expected Hesher to be some type of badass who was going to protect the kid from bullies but he seemed to bully the kid himself.I thought maybe he'd help the dad & his son get over their loss & they'd help him in someway but Hesher squatted in the family home & really did nothing but cause havoc.Hesher wasn't all that bad of a movie but It wasn't all that good either.Joseph Gordon-Levitt was perfect in his role as Hesher though

A sortof 'drama-dy' about couping with loss, forgiveness and the like. Hesher is a cool, funny and very anti-everything character, but he is also an unlikely source of wise advice. The film hias a good mix of touching moments and laughs.

A different kind of Hero!

This is the tale of a grieving boy, TJ, who is living with his chronically depressed father (Rainn Wilson) and struggling to deal with a rather nasty high school bully. His mother has recently passed away in a car accident and his stoic grandmother (Piper Laurie) tries to be the glue to hold all together but she is slowly losing that battle. He encounters an unpleasant and homeless Hesher who doesn't care about anyone or anything, uses foul language, does drugs but in some strange mystical way Hesher succeeds in bringing the father and son closer together than they ever could have been before. By using the most unusual tools, violence and ferociousness Hesher forces the family to deal with their pain and grief. Joseph Gordon-Levitt gives a solid performance, Devin Brochu was quite good …

No posts have been made on this movie yet. Be the first to start talking about Hesher!