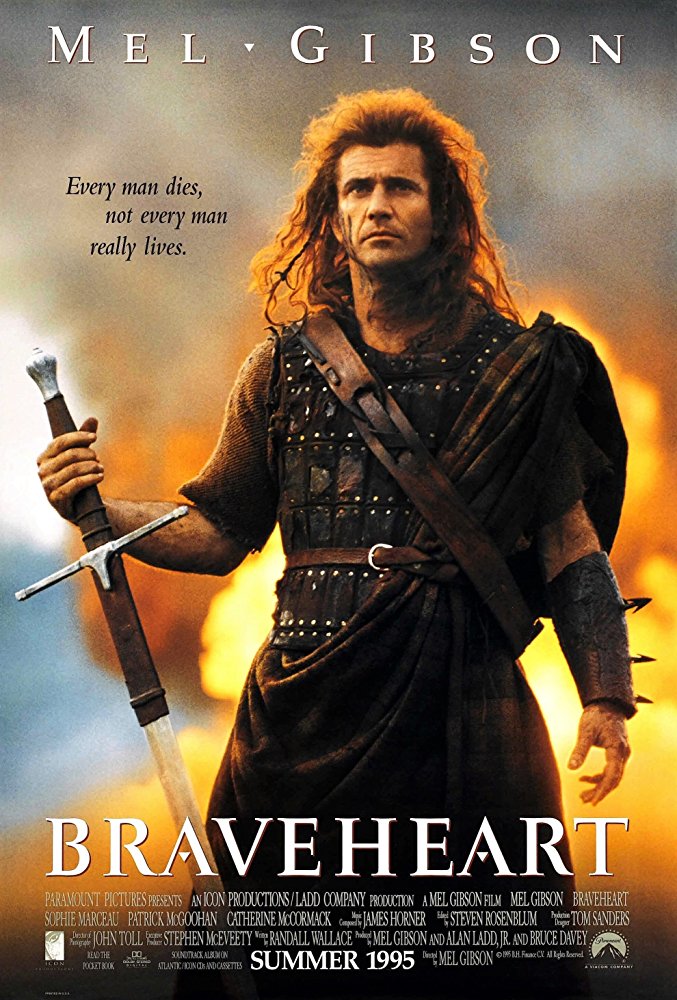 Plot: Mel Gibson's first official movie as producer paints a tragic, and sometimes beautiful, picture of what sacrifices must be made for freedom. Mel plays a thirteen-century freedom fighting Scott who motivates his countrymen to fight against the corrupt government.

Mel Gibson's vision as a director knows few limitations, it's just a shame that his hyper-violent, semi-fictionalized war epic about the Scottish revolutionary is so shallow and cartoonish.

A movie that everybody likes but I don't.

It took me almost 20 years to see this Best Picture winner and, I admit, I should have seen it sooner. A great film about William Wallace, Scottish freedom fighter. The acting is great, even if Mel Gibson does go in and out of his accent quite often. The Horner score was good, in fact it was sometimes overpowering. But, what I liked most about the film, was the fact that it's 3 hour running time didn't feel like it. I have a rule, that most films should need permission to go over 90 minutes, much less, be 2 or even 3 hours, but this one passed the test. Again, a must see!

Braveheart is the (exceedingly tall) story of William Wallace, a man who united the common people of Scotland to rise up against their English oppressors in the 13th century. Of course the historical "facts" vary between the dubious and the ludicrous, particularly those involving the princess of Wales, but I for one am not complaining about having to look at Sophie Marceau. It's easy to pick holes in it's accuracy, but if it were true to real events it probably would be a hell of a lot duller. This film is about rooting for the underdog; cheering on the good guys and booing the bad guys with some fantastically bloody action along the way. Gibson's accent is more Crocodile than Dundee, but he plays the part with just the right mix of charm and humour and has a great supporting cast to …

Mel Gibson has engulfed the Scottish hero William Wallace. Stunning cinematography, an endearing score and brilliant screenplay has made this flick one of the most quoted. Unbelievable action sequences, exquisite props, splendid make-up and believable extras. Mel Gibson a performance that is so engaging, dramatic with a sense of humor. This made the film more realistic in today's CG or effects heavy era. Memorable thought provoking lines: William Wallace - "Every man dies. Not every man really lives." "Aye, fight and you may die, run, and you'll live... at least a while. And dying in your beds, many years from now, would you be willing to trade all the days, from this day to that, for one chance, just one chance, to come back here and tell our enemies that they may take our lives, …

Braveheart is an epic movie that takes a viewer's breath away. The invigorating battle scenes, the incredible acting, and the fierce power of love all captivated me when I first saw this movie. James Horner's music is a masterpiece--it adds elegance and dimension to the magnificent film. Mel Gibson's zealous passion as his character William Wallace is truly an inspiration. Scots are very dignified, highly revered people, and this movie really presented Scotland's pride.Everything in this film was done tastefully. Even the ending, which by the way is heart-wrenching, was done artistically, as Wallace sees his wife during such a traumatizing event. Of course, nothing was better than the rich satisfaction of watching Wallace scream for freedom, freedom and not mercy. This epic film must be …

No posts have been made on this movie yet. Be the first to start talking about Braveheart!