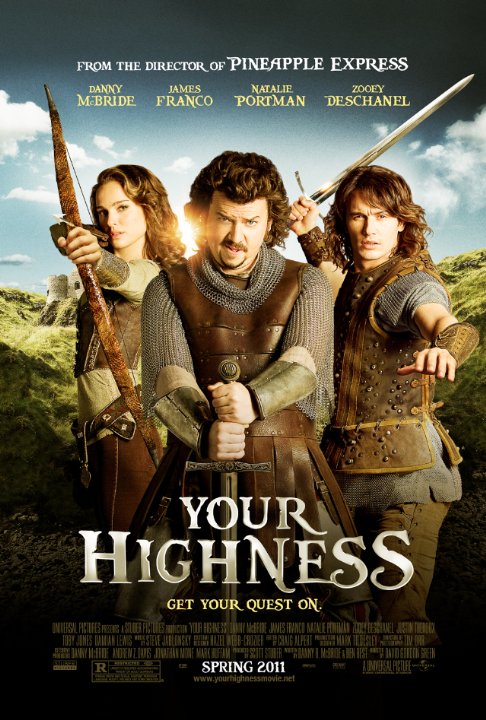 Plot: A brave prince must team up with his lazy younger brother to rescue his bride-to-be from the clutches of an evil wizard. -- Chris Kavan

The story is about a brave prince must team up with his lazy younger brother to rescue his bride-to-be from the clutches of an evil wizard. This movie has garbage humor and characters that are just there to tell horrible jokes and be as forgettable as possible. But for some strange reason i didn't hate this movie that much as other movies that came out in 2011.

I feel like I lost some brain cells after watching this movie.It was a completely stupid pointless waste of time.I'm so happy our local library got it so I didn't have to waste my $$$ to rent it.I cant even remember 1 funny part.How can Hollywood keep producing such garbage? There are so many good movies out there that go straight to DVD while crap like this goes to theaters

Not as terrible as some reviews I`ve read but also not what I would call a good movie. Has a very highly charged sexual composition so definitely not a movie for children. There are, I`m sure, many more comedies that are more worthwhile to spend ones money on.

Although there are funny moments, mostly due to the improv skill of the cast, this film seems haphazardly thrown together, as if the director and writers came up with the idea on the spot and wrote the entire script in a day. The lampooning of bad 70's and 80's sword and sorcery epics is only funny if you are familiar with those films. I'm not offended by much, but the vulgarity and constant swearing in Your Highness is so over the top that it almost feels like the film's creators are trying to throw every offensive thing they can into the film, rather than let it develop organically from the plot (ala Superbad or any Apatow film.) As a whole, directionless, hit-and-miss with humor, and disappointing, considering the cast and talent behind it.

No posts have been made on this movie yet. Be the first to start talking about Your Highness!