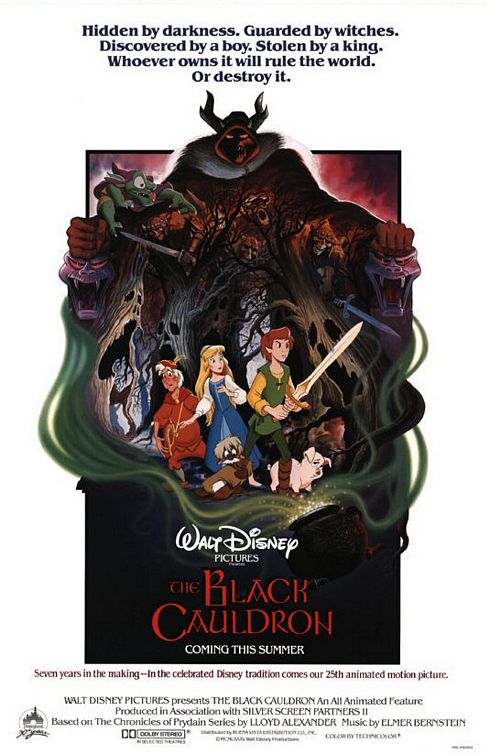 Plot: A swords-and-sorcery epic set in an ancient land, where young pig keeper Taran dreams of becoming a warrior and the evil Horned King is trying to obtain the Black Cauldron to raise an army of the dead. With the help of strong-willed Princess Eilonwy, Taran encounters mystical beings as he sets out to find the Cauldron before the dreaded Horned King can get his hands on it.

One of the most infamous features in the Disney canon, "The Black Cauldron" is a gallant, adventurous, and often terrifying adaptation of The Chronicles of Prydain.

Disney's long forgotten financial failure is not worth burying. The story and characters are lacking substantially, but the sense of adventure and dark detailed visuals make up for some of that. This does not feel like a Disney film at all. I believe that's why people turned off to it in the first place. It's an easily pleasing watch for those in the mood. Recommended more to those who enjoy medieval sword and sorcery fantasies.

The most expensive production and also the biggest flop for Disney so far. This dark medieval fantasy doesn't contain any hysterical musical number that became a trademark from this studio in later films, the animation techniques seen here cannot be seen in any other Disney film due to its high costs. Every person who apreciates animated feature films should see this one, I got it on DVD, yes it is worth it.

I never thought Disney could get it so wrong. But they did. The Black Cauldron is quite possibly, the worst film to come from the house of mouse. It's aggressively un-Disney, but unfortunately, that works against this shockingly awful fantasy film.

The Black Cauldron is a story about a young boy named Taran who wants to be more than a pig-keeper. His wish comes true, though, when it turns out that his pig, Hen-Ren can predict the future and create visions. Taran is told by his master Dallben to go into hiding with Hen-Ren, in order to protect the location of the mystical Black Cauldron from the Horned King. On the way, Taran meets a young princess named Elionwy, an old musician named Fflewddur, and a cowardly ewok-like creature named Gurgi.

I knew this film was doomed as soon as …

No posts have been made on this movie yet. Be the first to start talking about The Black Cauldron!