Before the Devil Knows You're Dead Movie Information 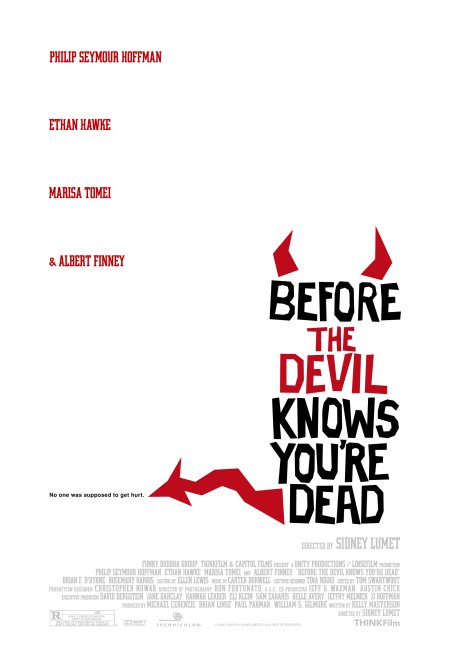 Plot: Two brothers hatch a scheme to rob the jewelry store owned by their parents and the ensuing results are disastrous. -- goodfellamike

A robbery is plotted, a plan goes awry, and lives are altered forever. This is "Before the Devil Knows You're Dead," a heartbreakingly tragic cautionary tale of want and director Sidney Lumet's final film.

The film is about two brothers hatch a scheme to rob the jewelry store owned by their parents and the ensuing results are disastrous. This movie was like a Quentin Tarantino film with the back and forward with the story and the characters. the acting is brilliant and the script is fresh and shape.

Talk about a dyfunctional family!!!! This was the most messed up movie Ive EVER seen.Usually in movies things start off bad for the characters & end up good but this movie went from bad to worse for everybody

"Before The Devil Knows You're Dead" by Yojimbo

Domineering Philip Seymour Hoffman talks his weak willed younger brother into helping him rob their parents jewelry store to solve both their financial difficulties, but when the heist goes wrong, their lives start to unravel. Sidney Lumet has been making quality thrillers for 50 years, but in his latest effort, he takes a few cues from his younger pretenders. The plot themes have a lot in common with Fargo and A Simple Plan and the execution is reminiscent of Jackie Brown and its familiar disjointed timeline. In fact there is little here that hasn't been done before so don't expect much in the way of originality or surprises. But the quality cast all put in solid performances and Lumet certainly still knows how to pace a story and crank up the suspense. No gimmickry, no pointless …

I thought the first part of the film was fascinating and its plot was as focused as it could be. But as the picture went on, I kind of grew tired of it. I guess it's because the whole jumping forward in time and back technique didn't work for me. Each scene, it made me want to think if certain events had happened already. I think it would've been more effective if the story was told in a linear manner. The acting is first-class--Philip Seymour Hoffman completely blew me away. As the movie went on, he grew increasingly crazy. Though his transformation made me laugh and feel uncomfortable at times, I stayed with him all the way. He made each scene he was in that much more special. Ethan Hawke was great as well. I felt bad for him because he played the moral conscience of the story even …

No posts have been made on this movie yet. Be the first to start talking about Before the Devil Knows You're Dead!