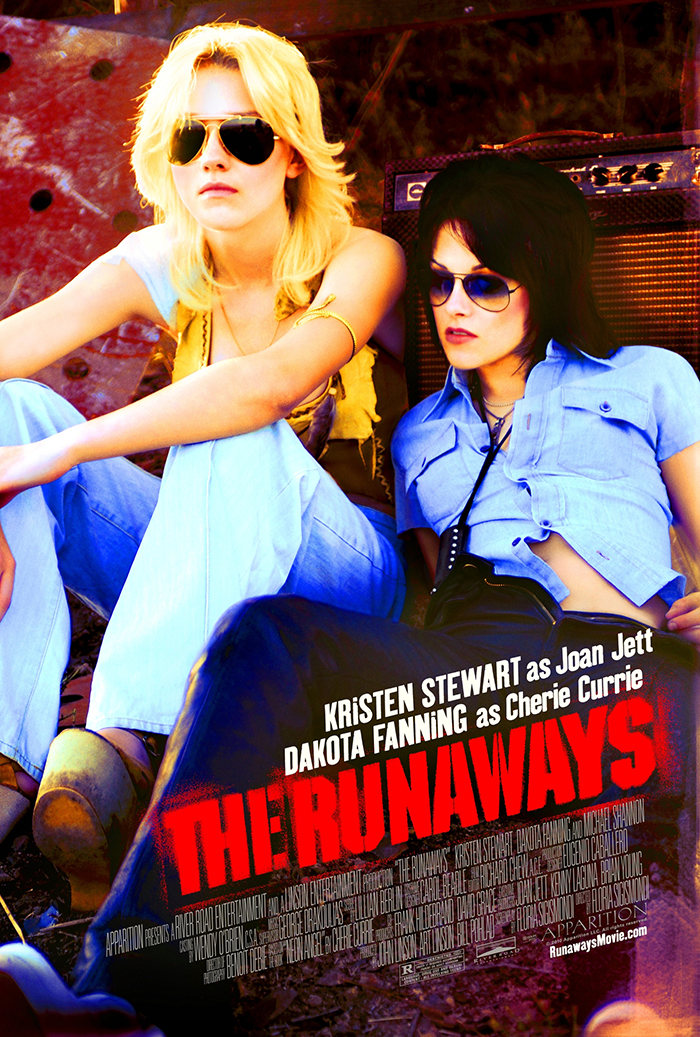 Plot: A biopic about the all-female teenage band The Runaways, including Joan Jett, Lita Ford and Cherie Currie as they ride a wave of punk popularity to fame, while trying to maintain group harmony. -- Chris Kavan

A biopic about the all-female teenage band The Runaways, including Joan Jett, Lita Ford and Cherie Currie as they ride a wave of punk popularity to fame, while trying to maintain group harmony. This movie is a alright Biopic. I mean the cast is good in they roles I just think that the movie is alright.

I loved Joan Jet in my college days and often wondered where she came from. Now I know. The movie was worth the rental.

Not like the usual musical biopics. This one is fast and fun with a punk attitude, just like a Runaway's song. Simply put... it's rock 'n' roll!

The Good and the Unnecessary

Kristen Stewart did an excellent job in portraying Joan Jett, but strangely enough, the actress that played Dakota Fanning's sister looked more like Cherie Currie than Dakota Fanning did.
The break up scene was very powerful, and when the lights were turned off and and you saw Joan's face you could tell that she felt as if everything she'd worked for was crumbling.
However, the film needed to have several parts cut out of it, random scenes that didn't help the movie at all. For instance, the scene where Joan is in the bath tub thinking of the lyrics for a new song is cool, but when she's filmed under water it's just odd and pointless. Also the scene where Cherie Currie is dancing around in her room singing 'Fever" is a bit unnecessary.
All in all, this is a very fast paced, good …

Thought it was brilliant!

I was nervous about this one because I've been a fan of the Runaways for 30+ years and Joan is such an icon. I honestly could not see Kristen or anyone else for that matter playing her and Dakota... little Dakota as Cherie?? I sat on the edge of my seat in the theater waiting and from the first note of Roxy Roller to the last note of Love is Pain I was completely captivated. I was brought back to my childhood and forgot that I was watching Kristen and Dakota but was seeing Joan and Cherie. They for lack of a better word were brilliant! I was pleasantly surprised also when I realized they were doing all their own singing and they weren't destroying the music... they ROCKED IT! Yes there were parts that were historically incorrect ie. there was no Robin Robinson on bass... Jackie Fox, …

Just simply too outdated for 2010

If The Runaways had come out maybe 15 or 20 years ago, then maybe I would understand it more. Sadly it didnât, and as a result the film feels too outdated. Now, Iâm not saying that a film that covers the subject of the rise and fall of a rock n roll band is an outdated film, but if it indulges itself too much into the culture and generation of that time, then I would have to consider it outdated.

As absurd as this might sound, the other film that Iâve seen this year that I can compare The Runaways, would have to be The Social Network (as long as I compare to what other people say about the social network, not necessary my thoughts). As you may know, many people â not me â consider the social network to be a generational film. They say itâs a film that speaks of the times …

My DVD's: Biography by Snoogans

No posts have been made on this movie yet. Be the first to start talking about The Runaways!