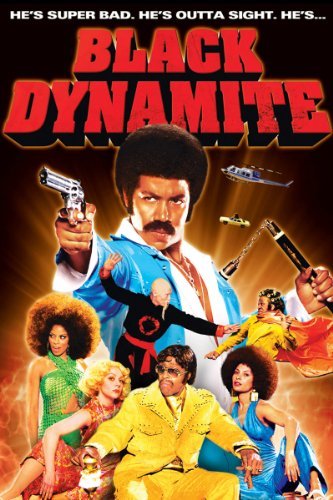 Plot: Black Dynamite is an ex-cia agent that is going to make the streets run red when his brother overdoes on drugs. He uses his kung-fu to avenge his death and kill all the people responsible. -- Josh C

PLEASE tell me theres gonna be a sequel or something

Although this is an almost perfect sendup of blaxploitation films, it occasionally repeats some of the same jokes a little too much (the dramatic zoom in, for one). All said, though, it's not meant to be taken too seriously and there are more quotable lines in it than Anchorman.

Freaking hilarious movie, even better as a drinking game. Drink every time they says "black dynamite" and you should be good for the whole film.

An ex-CIA agent, Kung Fu expert and lovin' machine known only as Black Dynamite avenges the death of his brother, cleans up the streets and sticks it to The Man in this homage cum parody of 70s blaxploitation movies. Scott Sanders is obviously a connoisseur of the genre as the whole film is pretty much spot on when sending up every detail of its intended target. There is the cast of casually racist and sexist stereotypes, the painfully clumsy exposition, laughably over the top action sequences and ham-fisted pseudo-messages as well as the usual glaring continuity errors, missed cues and clod hopping yet irresistibly funky music score. Michael Jai White not only looks the part but also is actually almost too good at the high kicking martial arts sequences. The one drawback is that it can …

No posts have been made on this movie yet. Be the first to start talking about Black Dynamite!