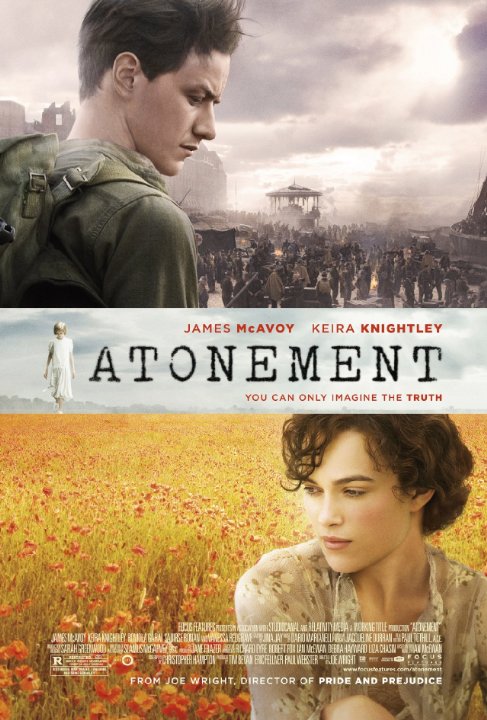 Plot: A young girl accuses her sisters boyfriend of a crime he did not commit - which sentences him to years of banishment. Based on the novel by Ian McEwan.

Spoilers alert.. I was truly devastated!! I hate Briony!! How can such a child ruin two lovers' lives just because she's sick in her head!! The fact that they died without meeting is killing me! I read the book but I liked the movie better.. unexpectedly.. :/

A little uneven, "Atonement" tries to be a grand sweeping epic that's just too ambitious for its own good.

The story is about a young girl accuses her sisters boyfriend of a crime he did not commit - which sentences him to years of banishment. This was 2007 movie of the year, the movie is so shocking with the war scenes and the love story between Keira Knightley and James McAvoy.

A young man is sent to prison for attempted rape by circumstantial evidence and the testimony of a sexually confused and jealous young girl, leading to his conscription to the army and experiences in war torn France. The quivering lower lips and forlorn glances of a repressed love affair. Check. Picture postcard images of merry old England. Check. Haunting images of war. Check. Yes, this typically British period romance has all the elements that make it ripe for award nominations and the adoration of Daily Mail readers everywhere and it has the solid performances, vaguely intellectualized script and attractively over embellished visuals you would expect. It is also as rather pretentious, rather sterile and rather too pleased with itself. In other words, a decent wartime melodrama that's …

When all is said and done I'm actually pleasantly surprised by this movie. First the bad: As for it being a romance it falls horribly short. It falls into the same shortcomings as many other romance movies who choose the lazy rout of sticking boy A and girl B into a room together and the audience is supposed to believe they are insanely in love with one another when no reasoning for this is ever shown. In fact this movie is one of the worst I've ever seen in that area. The one thing that is said about these characters is they had known eachother for years, barely spoke despite their close proximity and literally in the span of one day and two less than 5 minute conversations about basically nothing they are madly in love to the point they are willing to wait relentlessly for one another …

The cinematography is stunning...there are several difficult or unique shots here, which make me want to give it more credit..and the love letter montage (with several attempts set to various songs) was gorgeous...but as far as the movie goes as a whole......."Eh"

Unlike a few people here on Filmcrave whose opinions I continuously respect, I DO find McAvoy to be pleasing onscreen...he has the mannerisms of a stage actor, and when he (really) shoots, he scores, so his presence here increases my overall opinion....but at the risk of sounding superficial, Knightly in a backless dress is never a good idea, and this was an image that was unnecessarily repeated.

There were weak points in the screenplay, I'm guessing the novel is the way to go - but visually, this is …

Books that became movies by Muskurana

No posts have been made on this movie yet. Be the first to start talking about Atonement!