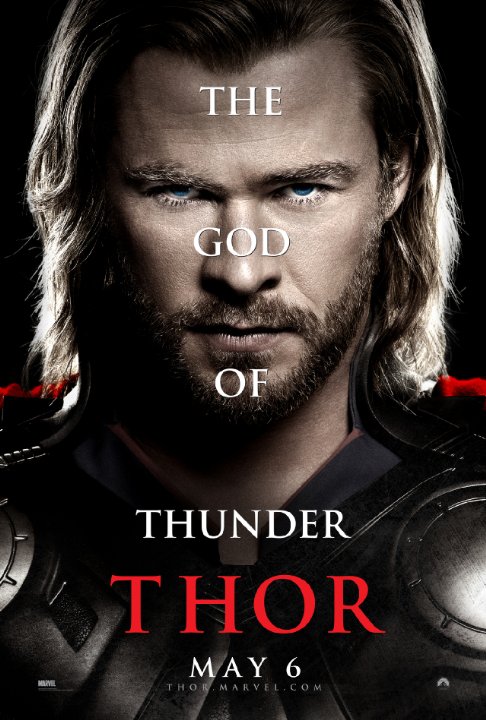 Plot: The mighty but arrogant warrior Thor is thrown out of Asgard, cast down amongst the mortals. Yet it is here he learns what it mean to be a true hero and he is put to the test when a villain from Asgard decides to invade earth and Thor is the only hope to protect mankind. -- Chris Kavan

Just the right combination of guts and spectacle balanced with passion and dynamic for the characters. Though still a popcorn film, Thor still delivers intelligent and thrilling writing.

I appreciate very much how they wrote the script, especially the ones for the denizens of Asgard. Well-spoken without being too clunky as Old English would sound.

Great superhero flick. I enjoyed it and even though the action scenes weren't on par with the other films, the great story made up for it.

The son of Odin is banished to Earth after provoking war with a neighbouring realm and finds he must prove himself worthy in order to return to Asgard to prevent his brother from usurping their father and claiming the crown for himself. The Iron Man franchise, together with Avengers Assemble have proven that Marvel comics can provide a platform for some highly entertaining cinema that can appeal to a wide age range. Thor unfortunately is a throwback to the days of the preposterous man-in-tights-grows-as-a-person morality tale. Thor himself is a bit like a rubbish Superman who talks in cod Shakespearian prose like a refugee from 300, with his half-arsed band of merry men in tow to provide some sub-Lord Of The Rings CGI infested action. The scenes in Asgard are painfully pompous and dull, …

For those unfamiliar with Norse mythology, Thor is the God of Thunder who wields the powerful war-hammer forged out of a dying star and could only be held by a worthy warrior. He is from the mystical realm of Asgard, son of Wise King Odin (Anthony Hopkins) and next in line for the throne, but the Prince of Asgard is stripped of his powers and exiled to the Earth after an "incident" which enrages his father to learn a lesson about humility. While on Earth he meets three scientists (Natalie Portman, Kat Dennings, and Stellan Skarsgard) who are trying to find out who and what he is. There's poignancy when Thor finds his hammer, Mjolnir, stuck in a rock, and realizes he could not pick it up even with all his might.

Meanwhile back on his planet, Thor's brother Loki(Tom Hiddleston) finds …

"Thor" is the successor of the throne of Asgard, but because of his arrogance and greediness, his father exiled him to the planet Earth and only can return to their world when he learned how a real king should act.

I don't know why I did underestimate this film, first teaser I saw of this film turned me off to the extent. I thought it would be just another wasted highly-budgeted film. BUT NOW, I AM COMPLETELY WRONG. This film is not bad at all. What bothered me while watching this movie is the costume and the set, it appeared very funny to me, yeah, that's all. The rest are fine, I love to see Natalie Portman, I think Chris Hemsworth done it well, but the character I love most is Loki (Tom Hiddleston). First time he appears on the film, you can already extract his character, …

Hmmmm I still say smaller, good actor is better than chiseled bad actor. I've had bad experiences with films starring wrestlers (See No Evil, The Marine).Maybe they can use 300-type magic and chisel an actor out of CGI?Too bad The Governator is retired and 40 years too old - he would have made an excellent Thor.I will also agree that Brandon Routh was a poor choice for Superman, but not because of his look, but because he was just kind of boring (and so was the story), but hey, was pretty good &hellip;

Oh yeah. and the other example was a stretch but strong in supporting my case... Nick Fury staring David Hasslehoff. Thought I'd throw that one in for fun.http://i49.tinypic.com/2r dgakx.jpg

This review is unprofessional and pertains to the family of this movie. I will try to keep it on course. I have not seen the movie yet but some repeated peevs are in action. The casted actor Chris Hemsworth does look good in his suit but do you want to know what rises anticipation up in me and my friends? A known actor that not only fits the role in size but fills it in acting; An actor that will fill the suit and represent what we think a superhero should be. Some previous actors have &hellip;