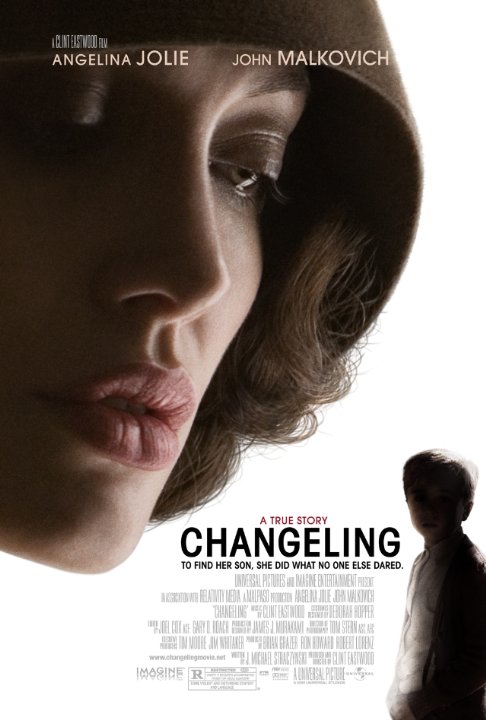 Plot: Based on a true story, a woman's son is kidnapped and returned to her months later. Unfortunately, it's not her son and the corrupt LA police department refuse to admit the mistake.

Based on a sad true story about this woman who lose her son is but returned to her months later. Unfortunately, it's not her son and the corrupt LA police department refuse to admit the mistake. This movie has heartbreaking seances when the mother has just have to live the that her might be dead or alive?.

I was hooked from start to finish

The premise makes it sound like this is a simple and straightforward story, but it's an emotional tale of a mother's journey for justice. Along the way, there's a fair amount of suspense and intrigue built up, but the film never loses its emotional center in a subtle performance by Angelina Jolie who has never been more vulnerable.

Changeling is the true story of a young mother in 1920s America whose son goes missing, but when the wrong boy is returned to her she is persecuted by a corrupt police force trying to avoid public embarrassment. Another beautifully crafted and intelligent drama from Clint Eastwood, Changeling is quite an unbelievable story. It highlights the dreadful, uncaring hypocrisy of corrupt officials, the appalling treatment of the mentally ill of the time, not to mention those "hysterical" women who were committed to avoid embarrassment or inconvenience. The period is meticulously recreated and the plot combines the story of a woman unshakably seeking justice against enormous odds and the investigation into a harrowing serial killer case. The cast are all of course quality, apart from the fact …

Clint Eastwood has finally done something that I've liked. With very little appeal to me, I went, knowing full well that I was going to see a film directed by the Oscar-hungry Clint Eastwood. What a tool. But I went, nonetheless, and I was stunned, actually stunned.
Sitting next to two very good friends, we became scared, horrified, frustrated, happy, depressed, enraged, and everything else in between while a hunt for a child turned into something larger and even more ominous. You at once feel sorry for the police officers for their plight, but then root against them as they torture a young mother who has lost everything in having her son kidnapped by a deranged killer.
You feel enraged when the child returned to her is not willing to admit the mistake in order to help, but are …

Angelina Jolie makes a true return to form and gives the performance of her career as Christine Collins, a mother whose case made national attention in the late 1920s: her son kidnapped, he is found months later, but upon seeing the child, Christine realizes that he is not her son. The case smashed apart the Los Angeles Police Department and revealed much of the corruption and greed prevalent. A heartbreaking drama, Clint Eastwood has given us a powerful film, one that is sadly underrated and has not achieved a bigger audience despite the fact that it was advertised fairly well. Those who have not gotten a chance to see this film, I urge them all to see it. The experience is more than just simply rewarding.Filled with beautiful performancesâfrom Angelina Jolie as the tortured mother, …

No posts have been made on this movie yet. Be the first to start talking about Changeling!