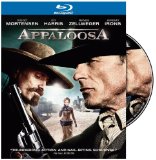 Plot: Virgil Cole and Everett Hitch arrive in Appaloosa to deal with Randall Bragg, a rancher with money and power who has run of the town. Things are complicated by the arrival of Allison French, a refined widow who threatens to divide the two men. -- Chris Kavan

Looks pretty and is well acted but the plot is pretty routine aside from an offbeat love triangle between the three leads. Renee Zellweger is badly miscast as a wayward gal stuck out west between two hard bitten gunslingers. Ed Harris and Viggo Mortensen are good together though Jeremy Irons pretty much yucks it up in a hammy Texan (?) accent.

Good casting and good acting, but a pretty forgettable movie.

A handful of great actors ho-hum around in an uninspired western. The story and characters are mundane. The action doesn't stimulate. I was bored through most of it. Mortensen is the only performer to lift the material, but he can't save this lame effort.

Is love worth dying over?

Virgil Cole (Ed Harris) and Everett Hitch (Viggo Mortensen) are both peacekeepers who have been upholding the law for the past dozen years. Killing outlaws is their job, and they travel on to find more scum to kill. They come to a town called Appaloosa which is terrorized by a gang of thugs led by a cretin by the name of Randall Bragg (Jeremy Irons). The gang buys food without paying, mess up bars, etc... but nobody dares to stand up against them. Harris and Mortensen are hired by a couple of businessmen in town to liberate the city of this blight.

Enter the Allison "Alley" French, a widow seeking comfort in the form of a new husband. Later we find out that her character will pretty much bed down with the nearest alpha-male no matter who he is. She plays the piano, chews her food …

Ed Harris and Viggo Mortensen play a pair of lawmen for hire who are engaged to clean up the frontier town of Appaloosa which is being terrorized by a gang headed up by big city dandy Jeremy Irons. Appaloosa is a western very much from the old school, far more character driven than most of the post Peckinpah/Leone generation and as such felt like a throwback to the days of Anthony Mann and his ilk. It concentrates far more on drama than gunplay which obviously requires quality performances, a task more than ably handled by an excellent ensemble cast. Harris and Mortensen in particular show great chemistry and every scene they share together is eminently watchable. This makes the gaping flaw in the film all the more obvious; namely Renee Zellwegger's painfully clumsy, pudding faced …

Well lets just start of with the words "HOLY SLOW".... I never been a big fan of westerns, but decided that I should give it a try after a recommendation from a "friend" or a person who was my friend untill he made that recomedation. So yeah it takes place in the desert in the town called ...,you will never guess, "Appaloosa" where the great duo takes on the gang of bad guys to save the town. There is a chick that come to town and she turns out to be whore.... and a waste of time. But somehow manages to stick around thru the whole movie. The movie has few shooting scenes, but it definetly lags in that department. It would earned at least another half star from me if they would have added 3 or 4 more shooting scenes. There are horses in this movie if you are intrested as well as bad …

Ed Harris stars in and directed this wonderful adaptation of the Robert Parker novel, Appaloosa.&amp;nbsp;Ed tried to interest Hollywood moguls in producing it but they don't like westerns so he made it himself, like Costner staring in, directing, and putting up the money for Open Range because Hollywood wouldn't touch it. It would be politically incorrect to delve into why Hollywood won't make westerns. Appaloosa was filmed in Texas and New Mexico so it looks, feels, like the real thing - and it &hellip;

I just saw the trailer on this.&amp;nbsp; I really enjoy westerns and Ed Harris but I don't seen anything great coming from this.&amp;nbsp; Maybe just another open range: Open Range