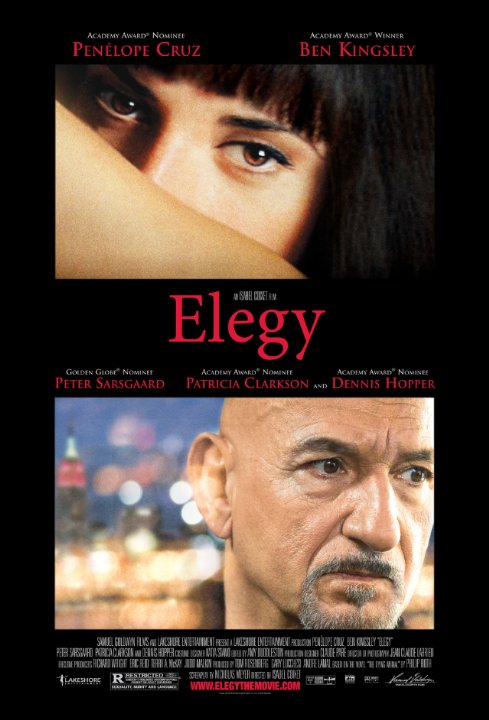 Plot: An older man struggles with insecurity and the pre-defined rules of dating younger women. When he becomes involved with a beautiful woman half his age, he is hesitant to believe it might last and preemptively sabotages the relationship.

What a mature exploration of love in the later years... Ben Kingsgley made me cry. Penelope Cruz earned my respect! A++

This felt like a three hour movie, party to the glacial pace of the plot and partly because of the boring characters. It also has about ten endings all of which are worse than the previous one. Everyone did a fine job acting but I just never gave a damn.

If you were moved by My Life Without Me, you might appreciate Elegy. Since My Life Without Me, I have been a follower of Isabel Coixet's movies. Although I wanted to like Secret Life of Words, I wasn't especially moved by it. Elegy is a return. The beginning is slow then it moves swiftly. Elegy is a tear jerker and is made up of beautiful performances by each actor.

This picture started out beautifully but as it went on, it got too wrapped up in its own soap opera. Iâm not sure whether the original material was the problem (it was based on âThe Dying Animalâ by Philip Roth) or if it was Isabel Coixetâs style of direction, but what I do know is that it should have been a more effective character study. Ben Kingsley, a cultural critic, falls for PenÃ©lope Cruz, one of his students. Kingsleyâs character is very obsessive, insecure about his aging body and has a lot of fears about not being accepted by certain people. Cruzâ character is beautiful but sheâs also very smart and she sees something in Kingsleyâs character that not a lot people do. So, in a way, theyâre a fit for each other despite the thirty-year age difference. I also …

Movies That Made Me Cry by Allison

No posts have been made on this movie yet. Be the first to start talking about Elegy!