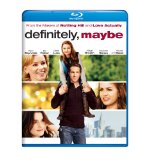 Plot: When his 10-year-old daughter grills him about his past relationships and her conceptions, Will Hayes changes the names but keeps the details leading up to his impending divorce and why his life turned out the way it has. -- Chris Kavan

This was a really cute movie. He ended up with who I thought he should have. It was also cool to hear the descriptions and cliches of the girlfriends coming from the daughter. The stuff she was saying was all true when it comes to romance movies. The "definitely, maybe" scene was so cute. I definitely recommend it to anyone who enjoys romantic comedies.

This movie was cute. That's it.

"I just want you to be happyâ¦"

On the eve of Will Hayesâ (Ryan Reynolds) divorce, his precocious ten year old daughter Maya (Abigail Breslin) asks him how he first met her mother, hoping that the nostalgia will convince him to reconsider the break-up. The movie touched on questions kids haveâ¦ How two people who have this incredible chemistry and love story can end up apart? The jaded Maya proclaims, "I know that love is not a fairytale." So Will tells the story of the three significant women he was involved with, changing their names and some of the details. The catch: Maya has to determine who her Mom is. However, the underlying and life altering mystery is not who Will married, but rather who was his true love. Maya begins to understand that love is not so simple, …

This movie really took me by surprise. Unlike the typical hollywood romance this one took a step back from the glitz glamor and memorable lines and instead told a real, sentimental tale about one mans love life that is just as endearing because of it's realism. I spend too much time during movies trying to figure out the ending and because of this, it really took me by surprise. To me this is like the sixth sense of romance movies, the ending was right in you're face all along but because of all the loops and turns you aren't even aware you're taking you never guess it. I applaud this movie for stepping out of box when it comes to the concept of love in film, which is usually portrayed as two people bound together by inseparable forces to which neither one could ever find another to …

This is one of the better atypical romantic comedies out there that is truly for everyone. All the leading actorsâRyan Reynolds, Abigail Breslin, Isla Fisher, Elizabeth Banks, and Rachel Weiszâdid a really good job embracing their characters. Itâs enjoyable watching this picture because itâs like playing detective: figuring out the identity of Breslinâs mom from Reynoldâs story. I was engaged because I gathered clues from the things that the characters said to their actions. Granted, I still got the answer wrong but thatâs the fun of it; itâs actually challenging. Breslin did a really good job playing a precocious kid, but not too much to the point where itâs creepy or annoying. Even though she acts older than her age, she still has that childish immaturity that reminds …

No posts have been made on this movie yet. Be the first to start talking about Definitely, Maybe!