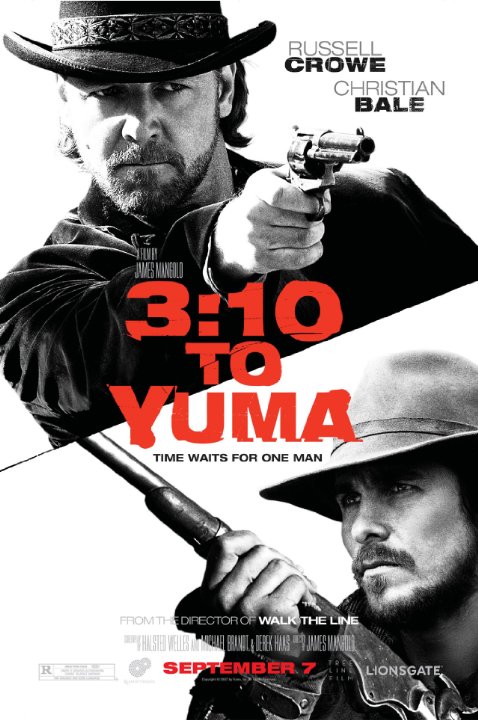 Plot: A rancher agrees to take in a prisoner before his court date while the prisoner tries to trick the rancher into letting him go.

There's not a lot of originality, bit there's plenty of good old western atmosphere and action.

A fast paced, action heavy western. The chases and shootouts entertain with ease and will satisfy most who enjoy these offerings from the genre. What makes this film standout more so, is the somewhat engaging relationship between our main hero and outlaw, both awesomely acted by Bale and Crowe. These men posses different viewpoints, but come to find mutual respect for one another by the conclusion. Something not often seen in westerns. It all culminates in a tense and unpredictable finale.

Featuring stellar turns from Bale, Crowe, and particularly Ben Foster, 3:10 to Yuma is a solid remake of a western classic that will satisfy fans of the genre.

Dan Evans (Christian Bale) together with his two sons witnesses Ben Wade (Russell Crowe) and his gang steal. Ben eventually gets captured and will be brought to the train while Evans assists for $200. Dan wants to redeem himself for his family while Ben has another side from the killer reputation. Awesome western with great screenplay and authentic gun action. Best lines: Ben - "It's man's nature to take what he wants. That's how we're born." "Don't muddy the past in the present, Dan." Dan - "Someday when you walk in my shoes you might understand." A character driven picture about doing the right thing. Only knack this reviewer noticed is the length and minute dull moments. Performances from Bale and Crowe were superb. Special features were decent with cast/director interviews, …

3:10 To Yuma is a remake of the 1957 Glenn Ford western in which an honest rancher injured in the civil war takes on the job of escorting a notorious outlaw to the prison train in order to save his family's ranch from the railroad. This film really does retain the spirit of the original as it has a real old-fashioned feel to it. The direction is glossy rather than gritty and the story of two contrasting personalities learning mutual respect under adverse circumstances is hardly a new one. But Bale and Crowe put in a couple of great performances, bolstering the rather workmanlike themes; Bale's down at heel working man trying to find some self respect and Crowe's educated and charming but ruthless outlaw spark off some really good chemistry, particularly during the great showdown finale. …

A train that runs out of steam

On a purely entertainment level this worked fine, but otherwise it lacked depth. The action was ramped up presumably to counter attention deficit syndrome, but for non sufferers like myself this was a distraction. The cinematography was remarkably bland - just point the camera at the actors, nothing too fancy like visual metaphors, or making use of the landscape. It was somewhat strange to cast two non Americans in the central roles in what is a quintessential American genre. Crowe was a but too smooth for me, though Bale did a good job as long you don't remember Van Heflin. The highlight in this respect was Ben Foster as the 'princess'. Having said all this if there are going to be remakes, then this is probably the best you can hope for.

No posts have been made on this movie yet. Be the first to start talking about 3:10 to Yuma!