They Were Expendable Movie Information 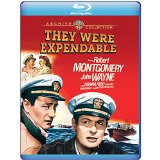 Plot: After Pearl Harbor, a group of PT boats stationed in the Philippians battles with the Navy brass just as much as with Japanese incursions. -- Chris Kavan

My Top Movies of 1945 by Indyfreak

To see war by Shawn

No posts have been made on this movie yet. Be the first to start talking about They Were Expendable!