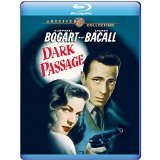 Plot: A wrongfully convicted man escapes San Quentin and with the help of a beautiful woman tries to clear his name as the bodies continue to pile up.

Right from the very start I just had a feeling I was not gonna like this movie & I was right.Something about it was off for me.I found it to be boring & just could not get into it.I watched about 15-25 minutes & just couldn't watch anymore.Maybe I needed to give it more of a chance & Maybe 1 of these days I will but it probably won't be anytime soon

This is my personal favorite of the Bogie/Bacall collaborations (all four of them). Of course I saw this before Key Largo and the script is sort of the same, but I enjoyed this one more. I would recommend that you see all their movies together, don't skip this one.

A man jailed for killing his wife escapes and with the aid of a beautiful well wisher attempts to reveal the truth behind her death. This film is mainly known for the first person gimmickry of the first half in which the action is seen from Bogart's point of view and for being the least of Bogart and Bacall's on screen pairings. The direction although gimmicky is actually quite a technical achievement and makes it feel quite contemporary still, and the whole film looks very, very nice, concealing Bogie's face in shadows and making excellent use of some great locations (surely Hitchcock had this film in mind when he made Vertigo). Unfortunately this gimmick causes other elements of the film to suffer; Bogie's on screen presence is sorely missed, and his wordless, bandaged face means that …

A rather dark road

Bogart and Bacall in their first film since they made their marriage public--it was a secret during The Big Sleep. Their on screen chemistry works very well in this film and Bogart's character is much more human. The combination of location shoots and first person camera perspective until Bogart's character, Parry, gets cosmetic plastic surgery presents an intriguing look for the film. Functionally, it makes it much easier to empathize immediately with the position of the escaped convict. It's not just Parry who is being threatened, but people are looking into the camera, at the audience and threatening the viewer. Leonard Maltin--in the making of featurette--puts it best, this is a good film, not a great one. That said, if you're looking for more original crime noir films from the …

No posts have been made on this movie yet. Be the first to start talking about Dark Passage!