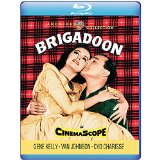 Plot: Gene Kelly stumbles across the enchanted town of Brigadoon, which appears from the Scottish mists only one day each century. In the course of this magical day, Kelly falls for a woman and must decide whether to leave the real world behind and take up permanent residence in Brigadoon.

Only for people who like musicals. It was pretty routine, but Gene Kelly is great as usual.

This movie/musical was ok. Not as good as the greats like The Sound Of Music or Oklahoma. But if you like musicals it is worth watching.

top 10 worst fantasy movies of all time by anderson100

No posts have been made on this movie yet. Be the first to start talking about Brigadoon!