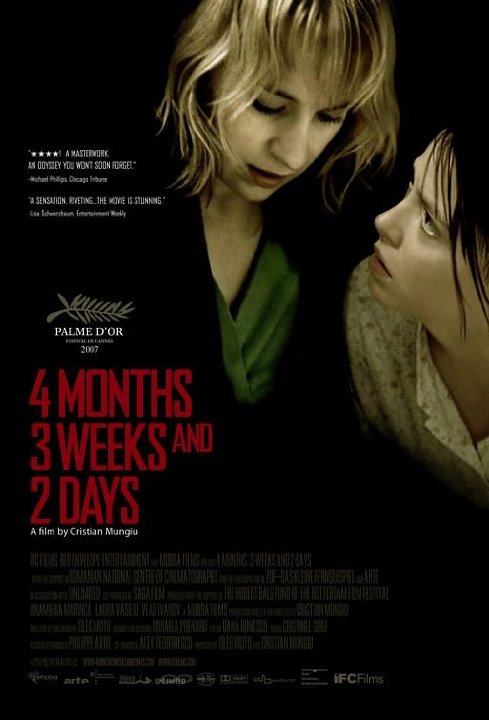 Plot: The story of a young woman helping her friend to have an abortion in Romania, which was highly criticized and not allowed during the 1980s of the communist run country.

Interesting, but i can't really say it's good. This romanian new wave is not good for cinema.

Winner of the Palme d'Or in 2007. Two dorm roommates in 1987 Romania struggle to get an illegal abortion for one of them. This felt more like witnessing reality than watching a movie. Tension throughout. I recommend this one.

A haunting film with impressive, real performances and dialogue. It takes an observer's perspective on a young woman's abortion, neither condoning nor condemning the act, but serving as a reminder of how relationships are affected by life choices. The stationary camerawork allows you to focus on the performances. Deserving of all its praise.

Has a Realistic Feel

This was an interesting move-going experience because I expected it to be like âLake of Fireâ only in a different language. The gritty tempo of it really worked for me because the situations the characters were in, the way they thought, talked and acted when faced with a dilemma could happen to anyone. This movie being in a different language did not bother me at all because the central issue is universal, especially in countries where itâs illegal or itâs looked down upon to get an abortion. The acting here is pretty believable and downright impressive thirty minutes into the film; each character is complex because all of them are flawed. Yet, itâs easy to connect with them, at least for me, because I saw a bit of myself in them. They deny the truth when reality is giving them …

Top 40 Films of 2007 by CarnivorousCouch