Lives of Others, The ( Leben der Anderen, Das ) Movie Information 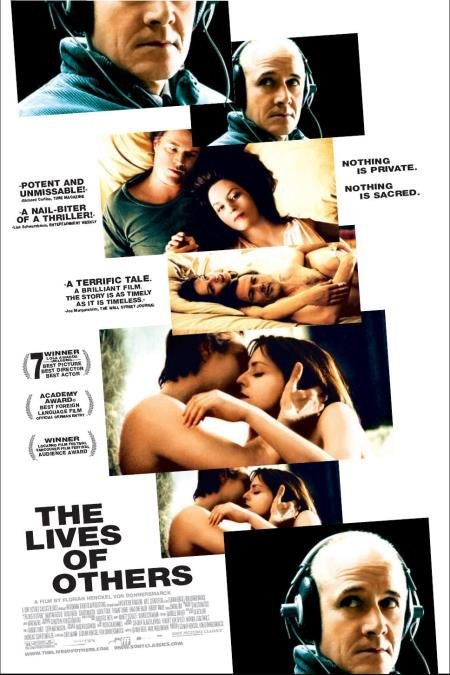 Plot: Focuses on the spying aspect of the former East Germany

fantastic from the beginning to the end.....

With quiet tension and involving characters, this is a special story of a fascinating part of German history. The historical setting is layered and realized in incredible detail, but the real star is the acting by a cast that portrays urgency and paranoia like no other. It's a cross between a thriller and a drama and all good.

A film that involves Bruno Hempf (Thomas Thieme), who covets Dreyman's girlfriend, actress Christa-Maria Sieland (Martina Gedeck), and playwright Georg Dreyman (Sebastian Koch). Screenplay was good with quotes such as âDonât let this blackness into your life.â and âsocialism must start somewhere.â The score was brilliant and suspenseful. Its plot however was too long to be engaging and the lack of better character development was evident. The Lives of Others is a descent drama that lacks thrilling scenes to be part of the genre.

"The Lives Of Others" by Yojimbo

A member of the East German secret police who is investigating a famous playwright and suspected subversive grows ever more sympathetic towards the people he is spying upon when faced with the everyday pressures of the oppressive regime he represents. Although touted as a "thriller", anyone expecting car chases and shoot-outs from The Lives Of Others will be gravely disappointed. It's a far more intellectual exercise that examines the meaning of freedom and its intimate link with personal privacy, something violated with impunity by The Stasi in the post war years of communist Germany. The story begins showing Ulrich MÃ¼he's character as not an evil man, but a joyless, officious bureaucrat who truly believes in what he is doing. It is only when he is faced with the reality of the …

Critics and casual audiences loved it. I didn't. To me, the only interesting thing about this movie is its subject matter: surveillance in East Berlin during the 1980's in order to retain their hegemony over their people. Sure, there were exciting moments that reminded me of movies when Nazis were about to discover Jewish people's hiding places but those moments weren't enough to save the movie. I found some characters to be a little too frigid even though they supposedly changed at the end of the film. The end was hopeful yet sad, which I usually like, but I thought the melancholy tone was ineffective. I just didn't buy it. I guess I had high expectations coming into this film due to four- and five-star reviews. I thought this was, at best, an average foreign film.

No posts have been made on this movie yet. Be the first to start talking about Lives of Others, The ( Leben der Anderen, Das )!