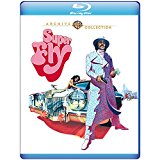 Plot: Super Fly is a coke dealer trying to leave the game. But, the mob has other plans. -- Gabe

Like Purple Rain, the soundtrack bumps this one up 1/2 a star. Don't see the movie unless blaxploitation films are your thing. Just get the soundtrack.

Top Films of 1972 by Neobowler

No posts have been made on this movie yet. Be the first to start talking about Super Fly!