The Man Who Would Be King Movie Information 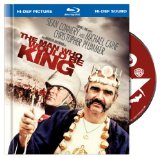 Plot: A pair of British Soldiers retire from the Army and try to go where white man are not really allowed...or so it seems.

Similar to an earlier Huston film, The Man Who Would Be King tells a story of greed and obsession. The film is mostly an energetic and adventurous romp, not getting too heavy-handed or moralistic, and featuring some memorable visual sequences and scenery. The cockney accents of Caine and Connery make for a fun team.

Action: 3/3 + Comedy: 2/2 + Good vs Evil: 1/1 + Love/Sex: 1/1 + Special Effects: 0.5/1 + Plot: 1/1 + Music: 1/1 = 9/10 or 95%. There simply aren't action films of this caliber, quality, and audacity anymore. Caine, Conner, and Plummer are perfect as an unlikely trinity who travel down the path of godhood. Plummer embodies the rational spirit of Kipling while Caine becomes the conscious voice of discretion behind Connery's god figure. Not every man should set their sights on becoming a modern Alexander the Great through 50 rifles and a Freemason emblem. Especially any man that can bleed.

grew up watching this movie. made my boyfriend watch and he absolutely loved it. hasn't lost any of it's appeal for me either. apparently the story (written by Kipling) was inspired by a real British soldier in the 17 hundreds (I think) who established himself as ruler somewhere in the Himilaeas.

"The Man Who Would Be King" by Yojimbo

Two likable rogues Michael Caine and Sean Connery hatch a scheme to conquer the untamed wilderness of Kafiristan using their military training to unite its warring tribes. Seeing Connery and Caine together is reason enough to recommend this film to anyone, but John Huston's adaptation of Rudyard Kipling's classic story lives up to all expectations. There is no superfluous action, love scenes or unnecessary bells and whistles; just pure storytelling at its finest. Unsurprisingly, the central double act play off each other brilliantly and together with an excellent Christopher Plummer as Kipling himself, they make for a fantastic parody of and homage to "Britishness" amid a perfect blending of humour and derring do. Huston effortlessly shifts tone, darkening the mood til the wonderful …

No posts have been made on this movie yet. Be the first to start talking about The Man Who Would Be King!