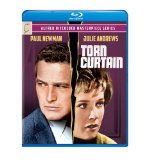 Plot: An American scientist publicly defects to East Germany as part of a cloak and dagger mission to find the solution for a formula resin and then figuring out a plan to escape back to the West.

Probably Hitchcock's most boring movie that he ever made.

I enjoy this side of Hitchcock - no twist endings or secret killers, just a tension-filled adventure through espionage and intrigue. This is the closest Hitchcock ever came (along with Topaz) to directing a spy film and he succeeds on every level, presenting a film that finds the right emotional beats between Newman & Andrews amid numerous action scenes. One of my favorite Hitchcock films.

No posts have been made on this movie yet. Be the first to start talking about Torn Curtain!