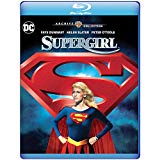 Plot: Lynda Lee is Superman's cousin who travels from Krpton in search of a magic stone that is the life source of their planet.

Why Peter O'Toole? Supergirl is basically like Superman 3 & 4 all over again. Corny one liners that can make everyone cringe, bad visual effect's and flat directing. Overall Supergirl is just another bad superhero flick.

I hope Faye, Peter and Mia got paid a HELL of a lot of money to embarrass themselves in this ludicrous drivel...

Yah. Something went wrong with this one. Although, with a bit more of passion could have been a great film. Supergirl's enemy is lame, so is the leading guy. Although, she's hot. Ok. Watch it, but only for her.

Worst All Time by StigX69

No posts have been made on this movie yet. Be the first to start talking about Supergirl!