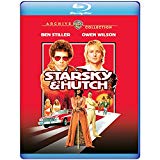 Plot: Based on the 70's series of the same name about two cops who battle crime the old fashioned way.

Based on the crazy 70's series of the same name about two cops who battle crime the old fashioned way. this movie was funny and awesome.

Another needless movie update of a t.v. series long forgotten. Mediocre, like the rest, but it manages to squeeze a few laughs out of the Owen and Ben team-up.

Revives the carefree spirit of the show with similar camraderie between Stiller and Wilson. Snoop Dogg steals all of his scenes as the sleazy Huggy Bear. Vince Vaughn is a letdown here, playing every other character he's ever played, but the blend of action and comedy works and is a fun and entertaining romp.

No posts have been made on this movie yet. Be the first to start talking about Starsky & Hutch!