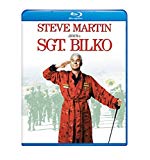 Plot: Steve Martin plays Sergeant Bilko, a successful con-artist who is more interested in gambling than the Army. He doesn't let being the head of an Army Post keep him from enjoying the luxuries of civilian life until an old nemesis from the past comes into the picture to ruin things for him. -- MovieAddict

Steve Martin is Master Sergeant Ernest Bilko, a man who has his hands in every nook and cranny of the Army base that he is stationed on. Dan Ackroyd is the bumbling Colonel Hall who is oblivious to Bilkoâs gambling racketeering which is a good thing since it makes it easier for Bilko to work around him. Enter the smarmy and sarcastic Major Colin Thorn (the late Phil Hartman), who has it in for Bilko. Thorn was sent to Greenland because of a fixed boxing match back in the day, a fight of course fixed by Bilko. Now itâs payback time and Thorn sets out to burn Bilko once and for all with humorous results. Glenne Headly turned in a notable performance as Bilko's long suffering girlfriend Rita Robbins and there is a cameo of Chris Rock. Itâs funny stuff! If youâre a fan of Steve …

No posts have been made on this movie yet. Be the first to start talking about Sgt. Bilko!