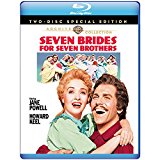 Plot: Adam, the eldest of seven brothers, goes to town to get a wife. He convinces Milly to marry him that same day. They return to his backwoods home. Only then does she discover he has six brothers - all living in his cabin.

More about visuals, music and fun than actual story. It's a light, but entertaining musical that I found more enjoyable by the fact that it contained a family of lumberjacks that lived in the mountains.

There's a lot of vivacity and color to this energetic musical. It doesn't quite break new ground in the dramatic department, but the musical numbers are fun and exuberant.

Techni-colorful, energetic and unashamed about gender stereotypes, this is just a fun, fun movie. My wife and I laughed quite a bit. I mean, c'mon, they kidnap the girls! Hilarious.

My DVD's: Musical by Snoogans

No posts have been made on this movie yet. Be the first to start talking about Seven Brides for Seven Brothers!