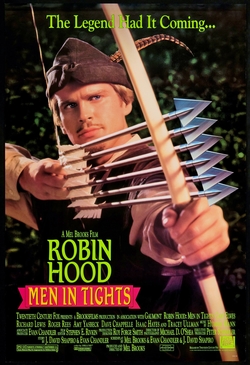 It has its moments, but it's not Brooks' best effort.

when it comes to Mel Brooks, you basically have The Producers (1967), Blazing Saddles (1974), and Young Frankenstein (1974), Spaceballs (1987), then everything else. This is towards the top of that "everything else." It features everything we love (and hate) about late period Mel Brooks. I love the Mel Brooks cameo, and Cary Elwes (who is good in almost everything that he does) basically reprises his role from The Princess Bride (1987). The cheap early 90's rap is very dated, and was probably dated in 1993. Bonus points for Dom DeLouise as The Godfather.

Mel Brooks directed and co-wrote this satiric comedy which lampoons a number of cinematic treatments of the legend of Sherwood Forest, including Robin Hood: Prince of Thieves and The Adventures of Robin Hood. This movie is funny and that line that the villain say "He deered to kill a king's dare! HA HA HA". &#65279;

Robin of Loxley (Cary Elwes) with his merry men together with Ahchoo (Dave Chappelle), Blinkin (Mark Blankfield), Little John (Eric Allan Kramer), Will Scarlet O'Hara (Matthew Porretta) try to find justice from the abusive Prince John (Richard Lewis). Best scenes were Little John drowning, the scenes with Mafioso Don Giovanni (Dom DeLuise), Farfelkugel moving, Robin accidentally bumping into a crew at break, viewing the script and Blinkin missing a high five. If only Robin's character were funnier, the supporting cast and script made the film hilarious. The cameo at the end was a nice touch. Blending modern culture for its era was innovative. Robin Hood: Men in Tights may have some iffy moments, its still a good comedy compared to other of its genre.

No posts have been made on this movie yet. Be the first to start talking about Robin Hood: Men in Tights!