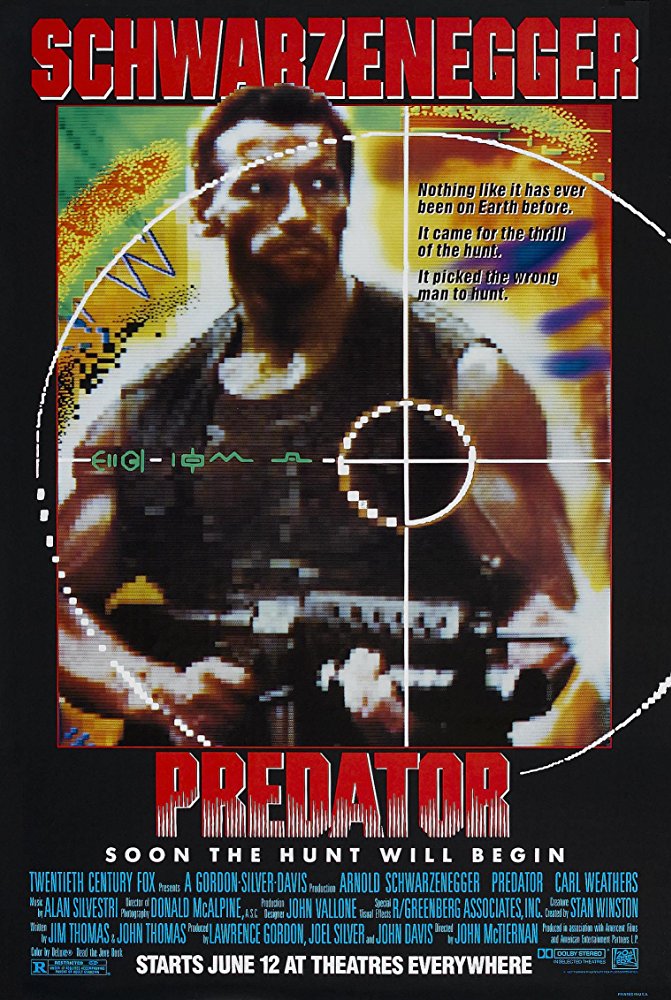 Plot: A group of Commandos are sent to a Central American region where they are supposed to fight hoodlums and thieves when a transparent killer shows up to teach them a lesson.

Plenty of action, but not a lot of narrative depth. Just the way action fans of the 1980s liked it.

Predator started the great series of fast moving high energy si-fi films without trying for profound story plots or deep conservations about feelings. It went from introductions to the meat grinder less a forty minute wedding scene or some loving family story turned to revenge killing. The idea that action can carry an entire movie was proved to be an effective mode of story telling and eye candy at the same time. The acting was intense, humorous and business like. At the end of the rollercoaster ride all I could say was WOW followed with a sign of relief.

No one can hear you scream, in the jungle. This awesome action flick is about a group of Commandos are sent to a Central American region where they are supposed to fight hoodlums and thieves when a transparent killer shows up to teach them a lesson. Predator is a really fun good sci-f i action movie. It as good visual effect's and the predator look's cool in the movie.

Arnold Schwarzenegger and his crack special forces unit are sent into the South American jungle to rescue the occupants of a downed helicopter, only to find themselves the target of an unseen adversary who starts to pick them off one by one. Arnie was at a crossroads when he made this film; up until this point he was known as the Terminator, but let's face it, playing a robot isn't usually the stepping stone to international superstardom. The rest of his CV consisted of films like Raw Deal, Commando and Red Sonja. Not exactly the stuff of legend. It can be argued that Predator was the film that set him on his way to becoming Governor Schwarzenegger rather Steven Seagal II. It's a perfect blend of gung ho action, tongue in cheek macho posturing and sci-fi invention. The first part of the …

If It Bleeds - We Can Kill It

Predator is the ultimate action movie as Arnold Schwarzenegger leads an elite military team into the Central American jungle. This film starts your adrenaline pumping from the very beginning and it will remain as such until the very end. The characters are excellent and the casting is perfect with the likes of Jesse Ventura and Carl Weathers. The films story is rather simple but it works perfectly as Arnold and his team realize they are being hunted by something not of this world.

While Arnold Schwarzenegger isnât always known for his great acting he turns in a wonderful performance in this film. All the actors really bring their characters to life and through all the action there are some great character moments to be had. Kevin Peter Hall also does a great job as the title …

"Dutch" (Arnold Schwarzenegger) leads a group of commandos into a dense Central American jungle to rescue hostages, which they learn have been slaughtered by their captors. They find the butchered remains of one of the ones sent in to rescue the hostages. They capture a female captor after destroying the encampment, and killing the majority of the captors and begin the journey back to where they are to meet with the helicopters that would pick them up to leave the area.

It is then when they discover something is hunting them, something not from this Earth.

First off, this movie is VERY bloody and graphic, and should not be viewed by young or impressionable children unless it is on broadcast television and edited for content and language.

On the plus side, this movie is full …

No posts have been made on this movie yet. Be the first to start talking about Predator!