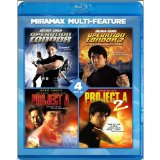 Plot: Chan plays a secret agent embarking on his biggest mission yet: To find the fortune in gold that the Nazis buried in the Sahara Desert during WW II.

Good sequel. Delivers more of that Jackie Chan brand of entertainment. The final fight, in the wind tunnel, is quite awesome.

My DVD's: Martial Arts by Snoogans

No posts have been made on this movie yet. Be the first to start talking about Operation Condor - Armor of God II ( Fei ying gai wak )!