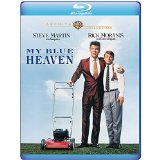 Plot: An uptight FBI agent must protect a mobster-turned-informant in the suburbs, but the brash, outspoken Vincent Antonelli wants to do anything but keep a low profile. -- Chris Kavan

I remember watching My Blue Heaven the 1st time it came on cable TV & loving it.Watching it now, It's still a good movie but it's another 1 of those movies where it's not as good as I remembered.It also made me wonder, What Steve Martins Vinnie Antonelli would've been like if this movie was a drama & not a comedy

My sister loves this movie. I think it's alright.

A decent enough comedy. The chemistry between Martin and Moranis is pretty good, but most of the jokes are hit or miss. Still, if you're looking for an overlooked comedy, this is a good place to start.

my fav. comedies by Holas

Good Movies I Have Seen by WLF

No posts have been made on this movie yet. Be the first to start talking about My Blue Heaven!