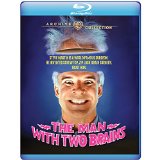 Plot: A brain surgeon finds himself in a loveless marriage and falls instead for a talking brain in a jar.

Dated but very funny Steve Martin vehicle full of quotable lines and surreal slapstick. One of his best.

Probably one of the most overlooked comedies ever! Steve is a very funny man, but not all of his films give him the potential to show that. This one absolutely does. It's just downright super silly and hilarious.

No posts have been made on this movie yet. Be the first to start talking about The Man with Two Brains!