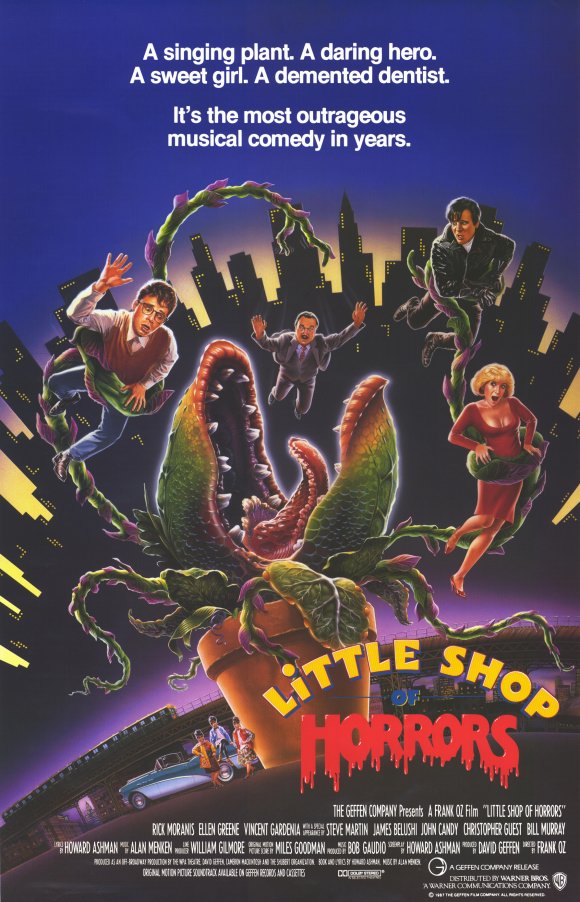 Plot: Seymour Krelborn, a nerdy orphan is raised and given a job by Mr. Mushnik in his run-down florist on skid row. As an eclipse goes by, he finds a strange and unusual plant he calls Audrey II, after the co-worker he secretly pines for. When the plant displays a taste for blood, he gets concerned. As the plant becomes a hit it grows larger and is soon eating people whole. Can Seymour and Audrey stand up to the monster plant or will it have its way and rule the world? -- Chris Kavan

People rave about Steve Martin's cameo, but comic musicals fail because of one fundamental flaw. Comedy songs are NEVER funny.

People rave about Steve Martin's cameo, but comic musicals fail because of one fundamental flaw. Comedy songs are NEVER funny.

You remember that Total Eclipse of the Sun

All around great movie, cast and story. I don't know who I liked the best. Ellen Greene, who I also loved in Pushing Daisies, was fantastic. I even liked James Belushi's 5 minute role. But, I have to give it to Moranis and Martin. These two to great work together. I've seen them in this, in "Parent Hood' in "My Blue Heaven' and I hope many more movies. They just have good chemistry together. But the movie was a musical remake of the one that claims to have Jack Nicholson. Nicholson's character in the original was played by Bill Murray in this great version. Murray did a much better job, wow, did I just say that. But yes, Murray did! The music, the plant and the three singing narrating women were great. I wonder if anyone noticed that two of the women were the same lead women …

My Favorite Steve Martin Movies by The WHB

No posts have been made on this movie yet. Be the first to start talking about Little Shop of Horrors!