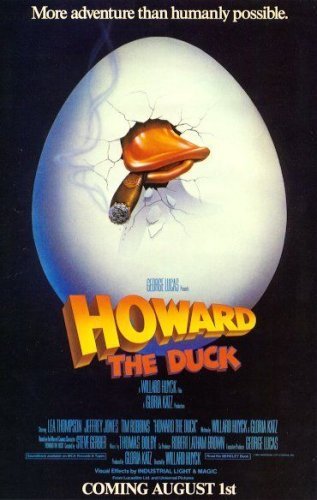 Plot: A live-action adaptation of the Marvel Comics Group publication of the same time which follows a clothes wearing, talking duck trying to adjust to life on a planet similar to his -- but inhabited by humans. -- The M.O.W.

Howard the Duck (1986) PG A live action film produced by Lucas films (George Lucas of Star Wars fame) starring Lea Thompson and Tim Robbins (he isnât Howard). The main star of the film is a cigar smoking, foul (no pun intended) mouthed duck about 3 feet tall based on a series of best-selling comic books. The film is filled with bad jokes, horrible dialogue, crappy special effects, and what makes this film almost unwatchable is the sexual attraction the Howard the Duck and Lea Thompsonâs character develop - See more at: http://lastonetoleavethetheatre.blogspot.com/2013/03/oz-great-and-powerful.html#sthash.vTifLAGu.dpuf

This terrible film is about a live-action movie.

To my surprise, I even remember viewing this in the theater when it came out. Luckily, I survived resisting from vomiting because of several scenes. A proud awardee of the Razzies: Worst Picture, New Star, Visual Effects, and Screenplay. Such a shame Tim Robbins and Lea Thompson was a part of this mess. Completely forgettable in all aspects.

Not bad, but it is a B-Movie

"Howard" (voiced by Chip Zien,and performed by Ed Gale, Yim Rose, Steve Sleap, Peter Baird, Mary Wells, Lisa Sturz and Jordan Prentince) is an average duck who has just got home from wherever and checks his messages and his newest issue of "Playduck," which he has a subscription to. As he is relaxing while thumbing through his magazine, he feels his chair begin to violently shake. Seconds later he and his chair are going through his apartment building's walls and eventually over the streets of "Marshington, DC". As he is screaming, those on the streets look up in shock.

Suddenly, "Howard" is flying through space itself and lands on a strange world that appears to be similar to his home, but it is inhabited by strange, featherless creatures who are taller than him. After his first …

Worst movies ever by Roberto DaCritic

No posts have been made on this movie yet. Be the first to start talking about Howard the Duck!