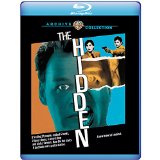 Plot: Two guys from a different planet are fighting each other for unknown reasons. Their high tech weapons sort of give them away although they still try to be discreet. They terrorize the town fighting each other until the truth about one them comes out. -- Mongoose

"The Hidden" by Yojimbo

A police detective puzzled by a rash of crimes in which seemingly ordinary, law abiding citizens suddenly become Ferrari stealing, bank robbing psychopaths comes to realize that the real perpetrator is not of this world. The Hidden could probably best be described as The Terminator meets David Cronenberg. The interesting concept is that an alien criminal comes to Earth and physically possesses its victims (with the help of some gruesome special effects that have stood the test of time surprisingly well), moving from body to body when the host becomes too damaged. This provides the perfect set up for some outrageous action sequences featuring machine gun toting strippers, police station shoot outs and high speed car chases punctuated with just the right amount of dry, tongue in cheek …

No posts have been made on this movie yet. Be the first to start talking about The Hidden!